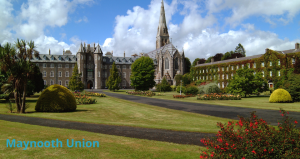 This year’s intake of 17 trainee priests for the diocesan priesthood in Ireland is a rise on last year’s cohort of 14.

The new batch of seminarians will bring the total number of resident seminarians training at St Patrick’s College Maynooth to sixty.

A further twenty non-resident seminarians are also pursuing their studies in St Patrick’s, together with some postgraduate priests and several hundred lay students.

Over the past three years, the number of new seminarians beginning their studies in Maynooth has been: fourteen in 2014; twenty in 2013; and twelve in 2012.

On Sunday, the President of Maynooth, Mgr Hugh Connolly, prayed that others would “hear the voice of the Holy Spirit” and consider a vocation to the priesthood.

Though the seventeen students have commenced their formation at the National Seminary, some of those from dioceses in the North of Ireland will continue their studies at St Malachy’s College in Belfast at the conclusion of the Introductory Programme in mid-September.

The new first year seminarians come from twelve dioceses. The breakdown of dioceses represented by 2015’s cohort shows that two of them, Dublin and Down & Connor, have three men embarking on formation.

The diocese of Killaloe has two students, while Armagh, Cork & Ross, Derry, Galway, Kerry, Ossory, Raphoe, Tuam and Waterford & Lismore have one student each.

Welcoming the new candidates, their families and friends to Maynooth on Sunday, Mgr Connolly said, “Our thoughts and prayers accompany these seventeen men who have taken the first step along the road to ordained ministry and to placing their lives at the service of Christ and of His people.”

He noted that the formation year will coincide with a Year of Mercy which will be celebrated throughout the world by the universal Church.

“When our Holy Father announced this he said, ‘I am convinced that the whole church – has much need to receive mercy because we are all sinners and will find in this jubilee the joy to rediscover and render fruitful the mercy of God, with which we are all called to give consolation to every man and woman of our time,” he said.

“The call of Jesus pushes each of us to never stop at the surface of things, especially when we are dealing with a person, because we are called to look beyond, to focus on the heart to see of how much generosity everyone is capable. No one can be excluded from the mercy of God.’”

Mgr Connolly concluded, “It is my wish that the year ahead will be a year of mercy and of grace for each one of us here in our seminary community. May we never stop at the ‘surface of things’ but rather push on to discover the presence of Christ in our community and in every person with whom we are called to minister and to share our lives. Let us pray that others will hear the voice of the Holy Spirit and that they may also consider a vocation to the priesthood.”

The breakdown for 2015 by diocese of the seventeen first year seminarians is as follows: