15 US seminarians to transfer to Irish College in Rome 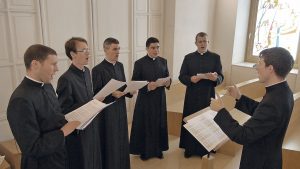 From September, 15 seminarians from the St John Vianney College seminary in the American Archdiocese of Saint Paul and Minneapolis will move to the Irish College in Rome.

The student priests will be pursuing their academic formation at the Pontifical University of St Thomas Aquinas, Rome, and are to transfer their residency from the university’s Bernardi campus to the Pontifical Irish College.

The new arrangement will initially run during the academic year 2016/17.

Archbishop Diarmuid Martin of Dublin and the Chair of the Board of Trustees for the Pontifical Irish College, along with the board of St John Vianney College, approved the new partnership at their June meeting.

Welcoming the seminarians Archbishop Martin said, “The presence of these United States’ seminarians will enrich and consolidate the seminary community in the Pontifical Irish College, under the overall leadership of its rector, Monsignor Ciaran O’Carroll.”

“Together with Archbishop Bernard Hebda of Saint Paul Minneapolis, I wish the project every blessing and success.”

According to SJV Rector Fr Michael Becker, “This new partnership is a testament to the strong collaboration between the University of St Thomas’ Catholic Studies Rome Programme and St John Vianney College Seminary.”

“Our association with the Pontifical Irish College will only enhance what has already been established,” he said.

Fr John Bauer, SJV formator and spiritual director, will also take up residence next month in the Pontifical Irish College along with the fifteen seminarians.

“It is hoped that this formative experience will connect SJV seminarians with both Irish seminarians and the international community of post-graduate priests who live at the college.

It will also provide SJV seminarians, as they continue their studies in the Pontifical University of Saint Thomas Aquinas, with an opportunity to experience the vitality of the universal Catholic Church, and form intercultural friendships, while pursuing their studies.”

Founded in 1628, the Pontifical Irish College, Rome, is home to 50 students, fourteen of whom are from Ireland while the others represent many different nations.

The College is home to a seminarian community and a post-graduate community. Four Irish diocesan priests make up the staff of the college, led by the rector Mgr Ciaran O’Carroll.

Established in 1968, St John Vianney College Seminary is the largest college seminary in the United States.

Each year more than 120 men, representing twenty dioceses, discern a vocation to the priesthood while earning an undergraduate degree from the University of St Thomas.

News of the move by the US seminarians comes in the wake of Archbishop Martin’s decision transfer three seminarians to Rome over “strange goings on” and a gay subculture at St Patrick’s College in Maynooth.

Speaking on RTE Radio’s Morning Ireland programme on Thursday, well known American canon lawyer, Fr Tom Doyle said he had great respect for Archbishop Diarmuid Martin and his judgement and added that he suspects there is a great deal more to the story of what is happening in Maynooth seminary.