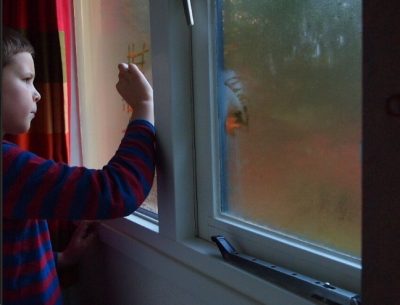 An estimated 140,000 Irish children are living in poor quality homes with leaky roofs, damp walls or damp floors, according to a new report, Growing Up in the Cold, published yesterday by the Society of St Vincent de Paul (SVP).

One in eight Irish children (12.3 per cent of the total child population) is living in sub-standard, poorly heated accommodation. These 140,000 children are in addition to the 4000 children living in temporary emergency accommodation because of homelessness.

In addition to the health risks that go along with living in deprivation or on a low income, living without adequate heating is affecting the health of these children, who are more likely to suffer from asthma or respiratory infections.

The report highlights how many Irish families are living on the brink, barely managing to pay their energy bills. Last year, more than one in ten (10.5 per cent) of Irish one-parent households reported that they could not afford to heat their homes, and 11 per cent of Irish households with children are in arrears with their energy bills.

The proportion of families struggling to pay their energy bills in Ireland is higher than the European average, with the SVP saying that this is chiefly because of the high cost of energy in this country. Ireland has the fourth most expensive electricity among the EU 28 countries and the second most expensive gas supply. Added to this expense is the public service levy used to finance upgrading the electricity grid and the tax charged on every electricity bill.

“The high cost of energy here in Ireland should be considered a key contributor to utility arrears and the inability of people to adequately heat their homes,” said the SVP’s Head of Social Justice, Dr Tricia Keilthy.

Shockingly, more than half of the poorest children in Ireland belong to households that do not qualify for the Fuel Allowance payment, despite the fact that their families rely on social welfare.

Last year, the SVP spent more than €5 million helping people with the cost of energy – an increase of 20 per cent on 2017. The SVP expects to receive over 50,000 calls for help this winter, many from families struggling to pay the bills and keep their homes warm.

“Over the next few weeks and months, SVP will be visiting families who dread wintertime because they find it impossible to heat their homes,” said SVP National President, Kieran Stafford. “Our volunteers will meet families trying to cut down on bills by living in one room of the house during the winter months. Others will be sitting in the cold and dark because they have nothing left at the end of the week to top up their pre-pay meter.”

While the Warmer Homes Scheme has helped some home owners, the scheme isn’t of great help to poorer families with children, who are more likely to be living in rented accommodation.

Dr Kielthy said: “Given tenure type is a distinct risk factor for children’s exposure to energy poverty, investing in measures to upgrade the stock of social housing and private rented accommodation needs to be a priority.”

At present the Department of Communications, Climate Action and Environment is holding a consultation exercise on how to improve energy efficiency in the private rental sector and the SVP will be making a detailed submission to the department on its views early in the New Year.