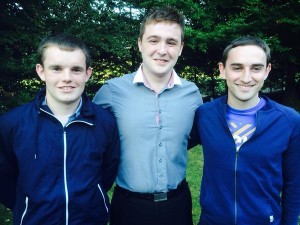 Thirteen men begin studies for the diocesan priesthood in Maynooth this week as well as one missionary priest.

This year’s intake of fourteen is a drop on the group of twenty who began this time last year.

They are Shane Costello from Taugheen, Ronan Armstrong from Claremorris and Joseph Gormally from Milltown.

The diocese of Down and Connor has two students and at the conclusion of Maynooth’s introductory programme at the end of September, these two seminarians will continue their studies at St Malachy’s Seminary in Belfast.

The dioceses of Ardagh & Clonmacnois, Armagh, Cloyne, and Kerry each have one new student priest.

At the end of September, the total number of seminarians in Maynooth will be around seventy.

A further twenty or so non-resident seminarians also pursue their academic studies at St Patrick’s together with a small number of postgraduate priests. Other seminarians study at the Irish College in Rome.

Welcoming the new candidates, their families and friends to Maynooth, the President of the College, Mgr Hugh Connolly recalled the words of Pope Francis to the seminarians of the Pontifical Leonine College, Anagni.

“The seminary is the place where we develop our vocation, gaining an in-depth understanding of the Gospel, Repentance, the Eucharist and Prayer,” the Pope said last April.

Over the past three years the number of new seminarians beginning their studies in Maynooth has been twenty in 2013; twelve in 2012; and thirteen in 2011.

A breakdown by diocese, of the fourteen first year seminarians for 2014, follows: