In January 2016, some 125 new families presented to homeless services in the Dublin region, and 39 families departed from services.

The Dublin Region Homeless Executive (DRHE) has said the figures show that families deferred accessing homeless services until after the Christmas period.

In response, Focus Ireland stated that ending the homeless crisis must be top priority for the next government, and that so far during the election campaign political parties have avoided answering questions about how they will resolve  homelessness.

The homeless agency, founded by Sr Stan, pointed out that 134 families (with 269 children) became homeless in January, of which 125 (with 253 children) were ‘newly’ homeless according to the DRHE definition.

Focus stated that this highest ever monthly increase in family homelessness is a reminder to voters and political parties that the ‘recovery’ has not reached everyone.

The previous highest monthly was 84 families in August 2015. 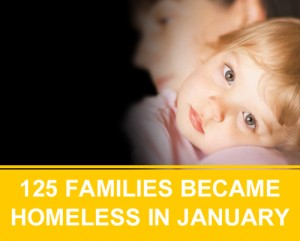 “The repossession of buy-to-let landlords (properties), often by banks owned by the Irish people, is a growing phenomenon and may account for up to half the recent cases of family homelessness.”

“There are over 35,000 buy-to-let landlords who are more than a year in arrears on their mortgages and we have been warning Government about this impending problem for over three years,” said Mike Allen, Director of Advocacy, Focus Ireland.

Another issue that the outgoing Government failed to tackle is rapidly increasing rents.

“Rents have shot up by 30% or 40% and even more in recent years and last month a report found that 95% of all properties for rent were too expensive for rent supplement limits,” he said.

DRHE analysis of the data relating to the 125 newly homeless families confirmed that 83% identified as the reason for homelessness:
– notice to quit  private rented accommodation;
– relationship breakdown (often following a move back in with family after leaving private rented
– accommodation;
– and overcrowding.

DRHE added that a more detailed review of the ‘relationship breakdown’ category for January 2016 is required. A cursory review of the ‘overcrowding’ category saw the figure for people made homeless from private rented accommodation increase from 35% to 39%.

Focus Ireland said its experience shows that the vast majority of families are becoming homeless due to economic factors rather than social factors.

“When they have to leave the extended family’s home this can lead to the cause of their homelessness being wrongly interpreted as ‘family breakdown’. However a deeper look at the stories of these families shows that they were only living with wider family because an earlier private rented sector tenancy had broken down for reasons such as they couldn’t afford to pay the rent or the banks had foreclosed on the landlord’s property,” said Mike Allen.

Focus Ireland said that in the last three months since November the charity’s team had achieved record results in supporting at least one family a day to escape from homelessness and move into a rented home.

This has been achieved by a combination of Focus Ireland resources and the new rent levels available under the Homeless Housing Assistance Programme (HHAP) (which allows the ‘maximum’ rent levels set by the Minister for Social Protection to be exceeded by over 50%).

“This shows that much can be achieved with rents that reflect real market levels, but also demonstrates that without effective measures from Government to prevent the flood of families losing their homes no amount of hard work from our team can solve this situation,” said Mike Allen.

The Dublin local authority responded to family homelessness in 2015 and 2016 by securing 1,059 tenancies in the Dublin region in 2015 some 485 were local authority lettings and 112 tenancies were provided through the Housing Assistance Payment (HAP) Pilot.

Dublin City Council is near completion of the first stage of in Poppintree, Ballymun, Dublin 11.

There are 22 two-story houses with three bedrooms, which will go to families currently in commercial hotels.

There are 25 new homeless action team staff members and a new Tusla Homelessness Liaison Officer to support families and particularly in relation to child protection.