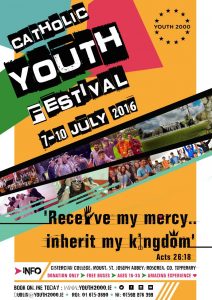 Around 1,200 young people are expected to attend the Youth2000 Summer Festival 2016 in Roscrea.

This number has surprised organisers of the event which takes place from this Thursday (7 July) until Sunday (10 July) at the Cistercian College in Mount St Joseph Abbey, Roscrea, Co Tipperary.

“We have regional meetings throughout the year and (this year) all past records have been broken in terms of numbers, which have just been huge. I don’t know if it’s the Year of Mercy, but more and more young people are booking. It is fantastic that the demand for this festival has been huge,” Brian O’Driscoll, Secretary of Youth2000 told catholicireland.net.

He said that those regional meetings have been seen 130-200 people on average – a sharp increase from 50-60 on previous years.

He suggested that word of mouth has led to a lot of bookings, especially from those planning to attend for the first time.

“From the registrations, phone calls and enquiries it seems to be the best year so far,” he said.

“A lot of first timers heard about previous festivals from their friends and what a fantastic time they had.” 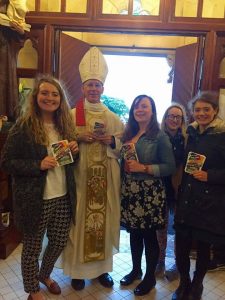 This year, Youth 2000’s new spiritual advisor, Fr Patrick Cahill, will speak on topics ranging from the Eucharist, to the Sacrament of Penance, to Our Lady. He is the first interviewee for a new blog which went out on the Youth2000 website a few weeks ago.

On it he spoke of admitting to himself, and his then girlfriend, that he wanted to discern if he had a vocation to the priesthood.

Now aged 37 he described himself as “a young priest” and stated “I think I am going to be a young priest for a very long time as there aren’t too many behind me.”

He recalled his time as an altar boy and at that time feeling “the majestic nature of benediction” which he said had “something beautiful about it”.

He is not the only speaker at this weekend’s gathering. The main talk on Sunday morning will be given by Maura Fitzgerald from Kerry who will make her debut at a Youth2000 national event. She has addressed some of the annual regional events before.

“She will speak of how to live the Christian life from a young person’s point of view and with all the struggles in the world and society,” said Brian O’Driscoll.

Celebrants of the Eucharist will include the Papal Nuncio, Archbishop Charles Brown, Bishop Phonsie Cullinan of Waterford & Lismore, and Abbot Richard Purcell ocso of Roscrea Abbey.

When Youth 2000 announced that Summer Festival would return to Roscrea in 2016, Dom Richard Purcell said, “Mount St Joseph Abbey has been designated a special place of pilgrimage by the Diocese of Killaloe in this Year or Mercy and we are very happy that all those who will be attending the Summer Festival will have to opportunity to visit the monastery. The festival will also be a special time of preparation for World Youth Day which takes place in Poland later in the month.” 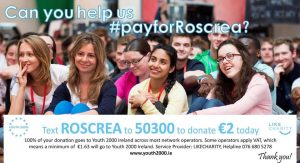 It is not all about the talks, there will be fun, games and sports and music throughout the four days.

When the young participants arrive they will join a smaller group so they never feel left out or alone.

There will be a huge array of workshops with everything from learning simple prayers to a master class in Lectio Divina with Cistercian Sisters.

Bishop Dónal McKeown of Derry and his diocesan youth group will host a workshop, and  there will be others on topics like: the cost of discipleship and martyrdom; the lives of the saints as role models; vocations and marriage, and much more.

Organisers state that the festival costs €90,000 to run for the four days, which works out at €75 per person for four days or €19 per person per day.

While many young people can pay this, others who cannot are also welcome and they can give what they can afford. Donations are always welcome.

At the time of going to press there were limited places on free buses from all over Ireland but plenty of spaces at the summer camp for anyone aged 16 -35 (under 18 with written parental consent).