A charity which provides support to older people in need has launched a campaign to help people put a face on those who will spend Christmas by themselves this year.

In the run up to Christmas, twelve posters are being released on ALONE’s Facebook Page and Twitter.

Each of the twelve posters features the face of one older person who uses ALONE’s services accompanied with a quote on their thoughts about Christmas.

The campaign aims to put a face, quite literally, to the real people who benefit from the support of ALONE, and to encourage everyone to remember older people in need at this time of year.

Ben (84) was asked, “What do you most look forward to during Christmas?” His response was, “Now I’m on my own all the time, I look forward to the good ALONE volunteer who calls one night a week, she’s very good.”

Meanwhile, Reg feels that the spirit of Christmas is being lost, “It’s become more commercialised. It takes away from the goodness of Christmas.” 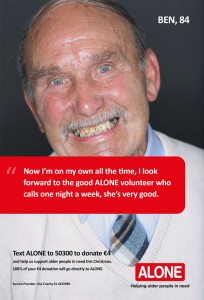 Last weekend, Archbishop Diarmuid Martin said in Rathfarnham, Dublin that Christmas is a time when people should enjoy themselves but in the things that are important such as learning to be together and to care for each other.

He told CatholicIreland.net that “probably one of the hardest things is to be alone for Christmas.”

Earlier, in his address to a packed church, the Archbishop said Christmas is a great feast and celebration of joy. “It is a moment when people return home to be together – the values of being with and for each other.”

He continued, “Christmas is so special that being alone at Christmas must be one of the saddest of all experiences,” he said.

CSO figures show that nearly 10% of people aged over 65 are at risk of poverty and ALONE has called on the public to support their Christmas campaign, “Compassion ALONE is not always enough”.

Seán Moynihan, CEO of ALONE, has urged people to “share the Christmas spirit by taking the time to visit older people who live alone or by donating to ALONE, as many are older people are heavily reliant on benefits to keep above the poverty line and 120,000 older people live alone across the country.”

“For most people, during Christmas they are surrounded by loved ones, a fire and food but for some older people it can be a very difficult time where they are left isolated and cold during the holiday season.”

“We are strongly urging the public to think of older people who might be isolated and alone in their community, and to take the time to visit and check on levels of heating and food. Even just a quick drop in for a cup tea or bring out their bins, these very small gestures can really make all the difference to an older person who is isolated and living alone.”

ALONE volunteers will be distributing food hampers to over 500 older people in need this Christmas. On Christmas Day, they will also bring hot Christmas dinners to older people living on their own.

The ALONE Christmas social dinner dance, a vital social outlet for service users, will be attended by over 150 older people. 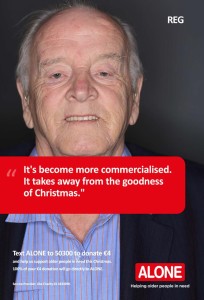 ALONE provides a crucial befriending service to older people who are isolated, along with providing permanent housing to almost 100 older people.

The most vital area of service provision during the winter months is the Community Response service, which deals with emergency calls for assistance.

The charity has a small, dedicated staff who work on the ground daily with older people and receives no Government funding.

They are therefore solely funded by donations from companies and members of the public.