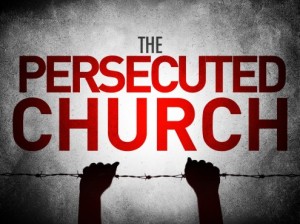 A new report on the persecution of Christians worldwide estimates that as many as 100 million are victims of discrimination, persecution and violence by either totalitarian regimes or followers of other religions.

According to the report by Caritas Italiana, the Italian bishops’ relief and development agency, 4,344 Christians were killed “for reasons closely linked to their faith” between November 2013 and October 2014.

During the same time period, 1,062 churches were attacked.

In North Korea alone, an estimated 50-70,000 Christians are being held in detention camps.

Other countries that persecute Christians include Afghanistan, Iran, Iraq, Somalia and Sudan, according to the report.

The Caritas report, which was published in L’Osservatore Romano, said the numbers highlighted a growing trend of intolerance in the Middle East, where many Christians have been killed or persecuted by militants from the extremist Islamic State (ISIS) movement.

“The declared aim of Caritas is to shed light on the causes of the persecution of Christians in the world, taking into account the economic, cultural and geopolitical variables of each of the countries involved, while giving voice to the silent testimony of the many Christians who continue to practice their faith despite risking their lives,” the report stated.

The type of persecution analysed ranged from government-inflicted, to violence carried out by terror groups.

The World Watch List, which ranks countries where Christians face the most persecution, has placed North Korea at No 1 for 13 consecutive years.

“It is number one on the World Watch List, the most brutal and dangerous place in the world to be a Christian, because the government requires and enforces with hostility a total dedication to the hero worship of their leader,” Open Doors CEO David Curry told The Christian Post last January.

Furthermore, Open Doors noted that Islamic extremism accounts for the main source of persecution in 40 of the top 50 countries ranked in the list.

Open Doors CEO David Curry also predicted that Christian persecution will increase throughout 2015, especially with the continued offensive of ISIS.

Christian Solidarity Worldwide has also identified North Korea as one of the very worst places for Christians, especially in regard to its prison camps, where people can be sent for offenses such as owning a Bible.

“There is no freedom of thought, conscience, religion or belief, and any North Korean who expresses an opinion or a belief which differs from the regime’s propaganda faces severe punishment. It is estimated that over 200,000 people are detained in prison camps in North Korea, where they endure dire living conditions and brutal torture. Many of these are Christians,” CSW says on its website.