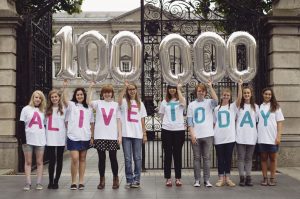 The Taoiseach and the Minister for Health were presented with a new report on Wednesday highlighting the number of lives saved thanks to Ireland’s constitutional protection for the unborn.

The Pro Life Campaign, who presented the actuarial report on lives saved by the 8th Amendment, said up to 100,000 lives had been saved by the constitutional provision.

They chose Wednesday for the launch because 7 September is the anniversary of the passage of 1983 Amendment. The pro-life amendment protects mothers and babies during pregnancy.

According to the PLC, it is impossible to arrive at a precise figure for the number of lives saved by the Amendment as there are so many variables involved. They said a conservative approach was adopted in the analysis.

A range of countries was chosen for comparative purposes, from England and Wales to culturally Catholic countries like Spain, Portugal and Belgium. 1994 was chosen as a start date for the analysis.

The PLC said those who wish to repeal the 8th Amendment often argue that it has no effect other than to ensure that Irish abortions happen abroad.

“This is mistaken – the 8th Amendment is in fact a life-saving amendment. At a very conservative estimate there are tens of thousands of Irish people alive today precisely because of the protection that the 8th Amendment gives to the unborn. This is evident from an analysis of abortion rates internationally,” the pro-life group claimed.

The 12-page report highlights that “Ireland has a much lower abortion rate than most other countries in the Western world.

The researchers said that one simple way to understand abortion rates is to measure the percentage of pregnancies that end in abortion.

A table showing the abortion rates of a range of Western and EU countries across recent years shows that the percentage of pregnancies aborted in Sweden in 2014 was 24.4% while Irish woman undergoing abortion overseas was 5.2% in the same year.

196,000 Irish citizens would not have been born which is a comparable number for the population of Cork city and suburbs.

If Ireland had the same abortion rate as Spain from 1994–2014, 121,000 Irish citizens would not have been born (the same population as all of County Clare).

If Ireland had the same abortion rate as Belgium from 1994–2014, 75,000 Irish citizens would not have been born (the same population as Galway city and suburbs).

The report claims that like all laws, the 8th Amendment plays an important role in shaping social norms.

“Perceived social norms are arguably the most powerful drivers of behaviours and attitudes. We all recognise the behavioural effects of simple public health measures such as drink-driving laws and the workplace smoking ban. Laws of this nature would be pointless if they didn’t influence individual behaviours.”

It warns that “A particularly strong social signal is sent when laws are changed. Behaviours and attitudes relating to abortion are bound to evolve alongside a change in the law, just as they do in other areas of life.”

Noting that Ireland still has a relatively low abortion rate – approximately 1 in 20 pregnancies are aborted, the report describes the situation in England and Wales as “so much more tragic”.

90% of babies diagnosed with Down Syndrome are aborted and more than 1-in-5 of all pregnancies are aborted (and in 37% of these abortions the women had one or more previous abortions).

“This is a symptom of a culture where abortion is normalised. Those who want to repeal the 8th Amendment do not seem to be concerned that this will likely result in widespread abortion becoming socially acceptable,” the report stresses.

Commenting on the commissioned report, Cora Sherlock of the Pro Life Campaign said, “There are few laws we can say with certainty save lives. The 8th Amendment is one such law. Taking a conservative read of what is contained in the actuarial report, there are tens of thousands of Irish people alive today thanks to the 8th Amendment. It is reasonable to posit that well in excess of 100,000 people owe their life to this Amendment.”

“To date, there has been way too much focus on the push for repeal of the 8th Amendment. It’s time some attention was given to all that’s good about this life saving constitutional provision.

“Abortion campaigners make the extraordinary claim that the 8th Amendment hasn’t saved a single life and has had no effect other than ensure that Irish abortions happened abroad. They want the public to believe in the fiction that the law does not influence our behaviour or that somehow the 8th Amendment is different to every other law ever passed and had no impact.”

Cora Sherlock warned, “The truth is repeal of the 8th Amendment would inevitably result in more lives being lost. That’s the tragic reality of legalised abortion. I look forward to a more wide ranging discussion on this aspect of the debate which is long overdue. Hopefully today’s report will start this conversation about Ireland’s life-saving law.”