More than 100,000 children to benefit from SVP and Sally Army joint Christmas appeal 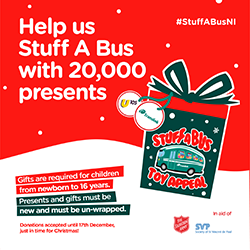 ‘Stuff the Bus’ campaign, with the aim of providing some Christmas cheer to more than 100,000 children.

This is the 40th year that the SVP and the Sally Army have joined forces to organise a Christmas appeal and it is the third year that the two charities have a ‘Stuff the Bus’ campaign in association with Northern Irish bus company Translink and local radio station U105.

Quite literally, the aim is to stuff a double-decker bus with more than 20,000 presents and gifts, which will then be distributed to needy families across the six counties of Northern Ireland.

He explained: “If you are able to donate a gift, The Salvation Army and St Vincent de Paul will distribute these to truly transform Christmas morning for kids and families across Northern Ireland who unfortunately wouldn’t have much otherwise.”

SVP North Regional President Frankie McClure said: “The effects of poverty don’t stop just because it’s Christmas, they endure throughout the year. This appeal means so much to the families and groups who receive our donations of gifts as they are seeing smiles on little ones’ faces on Christmas Day rather than tears and anguish, which is felt ten-fold by the parents who are unable to provide for their children. It is wonderful to have such supportive partners in Translink and U105 and we are grateful for their enthusiasm for the Appeal and we hope that the double-decker is jam-packed with presents.”

Major Paul Kingscott, the Salvation Army’s divisional leader, said: “As a church and charity, we are inspired by the Christmas message to reach out to people in need. The Family Appeal allows us to help thousands of children and young people in Northern Ireland. Last year alone more than 50,000 gifts were distributed to families in need locally. The Salvation Army and SVP are hoping that this year’s annual festive appeal will be the biggest ever, helping even more people in need this Christmas.”

Toy banks have been placed in 18 Translink stations in Northern Ireland. Donations can also be left at the Visit Belfast Welcome Centre in Belfast city centre. The campaign will run until Wednesday 18 December.