Home > Featured > ﻿Seeking to cope with a tragedy “beyond all understanding”

﻿Seeking to cope with a tragedy “beyond all understanding” 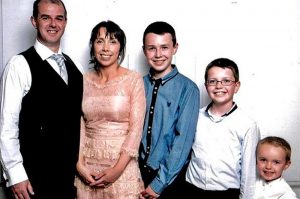 There was a numbed and respectful silence yesterday as thousands paid their last respects to the beautiful family so tragically struck down last week.

The funeral mass for Alan and Clodagh Hawe and their three children, Liam (13), Niall (11) and Ryan (6) took place at 4pm at St Mary’s Church, in the parish of Castlerahan, Co Cavan.

Children from the local primary school flanked the road as the five funeral hearses in sombre procession arrived at the church.

In his homily, the chief celebrant, Fr Felim Kelly CC, described the scene that greeted him when he visited the family on Christmas morning a couple of years ago.

“I know I was calling to see close friends and knew the welcome, Clodagh with her scones, red jam and mug of coffee, Liam, Niall and Ryan busily like budding engineers building all kinds of Lego. More importantly they invited in the old man and indeed showed him how to go about some intricate structures.”

“Alan standing with his back to the kitchen sink totally at ease enjoying the bean an tí and the antics of unspoiled and respectful sons. Though it must be said Ryan the youngest had the eyes of a rogue and a beguiling manner. That is my abiding memory of a family at Christmas,” he said.

He went on: “I invite you also to join me here in St Mary’s Church on any Sunday morning as the community gathered to greet the Lord and greet one another. Alan and Clodagh with their children most times together in their seat.”

“But each in their turn carrying out their ministries, Alan and Clodagh as readers of God’s Word, Liam likewise, also an altar server and a member of both choirs, junior and senior, Niall, altar server and soloist with the children’s’ choir, Ryan having progressed to the junior choir. With typical bravado announced “I’d be able for that”, that being a duet at the tender age of five with his buddy Lisa.”

“The family met Jesus in the Word, in song and in the breaking of the Bread, an encounter that enriched their very special qualities as individuals and as a family, week in and week out. This will be part of my abiding memory also.”

The family played an amazing part in the life of their schools as teachers, he said, paying tribute to the children too who were “gifted pupils, team players, budding leaders, warm friends”. The family also contributed to community organisations.

“How so much goodness could be destroyed? How such happiness could be invaded? How? Why? It is not for us to seek answers or to surmise about behaviour. We all are trying to cope with a tragedy beyond our understanding. With Christ on the Cross we too may cry out, ‘My God, my God, why have you forsaken so many who cared so much?’.” 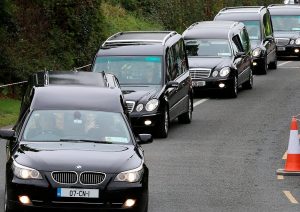 The Easter Candle quietly assures us ‘He is Risen’, said Fr Kelly.

“The Baptismal Font and its life giving water symbolising God’s gifts proclaims our dignity as the children of God on our way and the destiny of seeing God as he really is.”

“Clodagh, Alan, Liam, Niall and Ryan are at peace. This is what faith tells us. This is the assurance of hope. It is the response of love.”

Chief mourners at the mass were Alan Hawe’s parents and his two brothers and Clodagh’s mother and her sister.

Concelebrants at the funeral mass included Bishop Leo O’Reilly, who also presided at the Final Commendation at the graveyard beside the church where the family were buried together.

During the Mass, a symbol of the life of each family member was placed on their coffin: Alan’s uncle placed a Kilkenny jersey on Alan’s coffin, Clodagh’s mother Mary placed a family photograph on Clodagh’s coffin, the children’s aunt Helen placed a basketball on Liam’s coffin,  and their cousin Audrey placed a trophy on Niall’s coffin, finally the man Ryan knew as Grandad, Gerry, placed a woolly dog with appealing eyes on Ryan’s coffin.

“I want you to look at three other symbols here in St Mary’s Church,” Fr Kelly told the congregation.

“The cross behind the altar, a reminder of pain and suffering and sacrifice, and the words of Christ himself, ‘My God, my God why have you forsaken me?’ The Paschal or Easter Candle, a symbol of Christ’s victory over suffering and evil and the Baptismal Font, the symbol of humanity enriched with divine life and the promise of an eternal destiny.”

Symbols make a statement, he said and he appealed to those inside the church and the many standing outside to “stop and reflect on the symbols and the awfulness of the moment.”

“The Holy Spirit speaks to us in our anger or bewilderment or despair or even curiosity or possibly emptiness. He invites us, Tabhair dom do lámh, give me your hand.”

Gardaí believe that Clodagh and her three sons were killed by their  father Alan Hawe, a deputy principal at the local school, before he took his own life at the family home in Co Cavan.