Saint of the Day

Summary: St Mel came to Ireland with Patrick and worked with him until he was ordained in Ardagh. He is one of the earliest Irish saints and gave the veil to St Brigid. Patron of the Diocese of Ardagh and Clonmacnoise

Patrick Duffy recounts what is known about him.

Mel, a Briton, companion and relative, possibly a nephew of St Patrick. He may have been  the son of Conis (or Chonis) and Saint Patrick’s sister, Darerca. Saint Darerca was known as the “mother of saints” because most of her children entered religious life, some were later recognized as saints, and some became bishops. Mél and his brothers Melchu, Munis and Rioch accompanied their uncle Patrick to Ireland and helped him with his missionary work there. After St Patrick built the church at Ardagh, he appointed Mél as Bishop of Ardagh.

According to the Life of St. Brigid, Mél is said to have had no fixed see for most of his life in ministry, which fits with other accounts of his being a traveling missionary and evangelist. Acting upon the apostolic precept, Mél supported himself by working with his hands; what he gained beyond bare necessities, he gave to the poor. He is the patron saint of the combined diocese of Ardagh and Clonmacnois.

St Patrick in Ardagh
According to the Memoir of Tíreachán and the Tripartite Life, St Patrick came to Ardagh, a picturesque village in Co Longford, where he established a church. Mel, however, seems to have worked from there as a travelling missionary and evangelist.

It was Mel and not Patrick who “gave Brigid the veil”. The Leabhar Breac says he pronounced the rite of ordination of a bishop over her, but that when his companion Macaille protested, Mel insisted it was the work of God’s providence. Brigid’s successors, while not being bishops themselves, continued to have bishop’s jurisdiction.

Ardagh united with Clonmacnois
Ardagh, probably at first a monastic institution, was recognised as a diocese at the Synod of Kells (1152). A dispute arose as to whether it was a suffragan to Tuam or Armagh. This was resolved in 1235 in favour of Armagh. Clonmacnois was also a monastic institution until at the Synod of Kells it became a small diocese. It was at first attached to Meath, but since 1756 has been linked with Ardagh. Bishop Colm O’Reilly has been bishop of Ardagh and Clonmacnois since 1983. 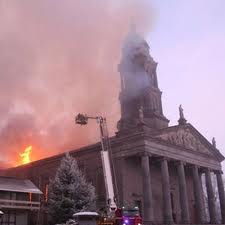 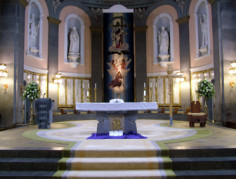 The Catholic Cathedral in Longford – was destroyed by fire on Christmas Day 2009, but now rebuilt  is dedicated to St Mel, as is the nearby diocesan college. A crozier believed to have belonged to St Mel was found in the 19th century at Ardagh, near the old cathedral there. It is now kept in St Mel’s College.

Our Archive of Saints