The Pioneer Association has announced that the relics of two of its most celebrated members, Venerable Matt Talbot and the Servant of God, John Sullivan’s Crucifix will be displayed for the duration of a major international two-day conference which the organisation is hosting at the end of the month as part of ‘The Gathering’.

‘The Spirit that Sets Us Free – Overcoming Addiction’ is taking place at Dublin’s All Hallows College over 28-29 September and coincides with the 115th anniversary of the founding of the Pioneer Total Abstinence Association.

The event will be opened on Saturday 28 September by the Spiritual Director of the Pioneer Association, Fr Bernard J McGuckian, SJ.

A series of talks will continue throughout the day, interspersed with questions and answers sessions and group discussions as well as a celebratory service of healing and wholeness.

The Pioneers will also launch a new ten-year emblem and certificate during the conference for those Pioneers who have attained ten years unbroken full membership. 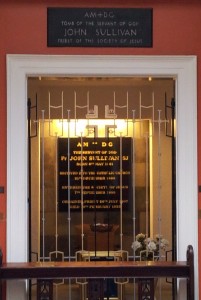 The keynote speakers include Jesuit campaigner on homelessness, Fr Peter McVerry, Majella Coyle, an addiction counsellor in white Oaks Rehabilitation Centre in Donegal, Denis Bradley of the Northlands Rehabilitation Centre and former chair of the PSNI,  while American Jesuit and author, Fr James Harbaugh, SJ will address, ‘The Role of Faith and Spirituality in dealing with Addiction.’

The conference is open to the general public so non-Pioneers are welcome to attend. More information: www.pioneerassociation.ie  Credit card bookings can be taken over the phone by contacting Margaret or any member of staff in the Pioneer Office on (00 353) 01 874 94 64.

The Pioneer Total Abstinence Association was founded in 1898 by Fr James A Cullen, SJ in the Church of St Francis Xavier, Gardiner Street, Dublin. It is a spiritual, prayer-based organisation founded to help address the problems in society caused by alcohol and substance abuse.

It has as its chief aim the promotion of the virtue of temperance. Pioneers work towards achieving this aim primarily through Faith and prayer, self-denial leading to inner freedom, setting beneficial example to others and presenting alternatives to individuals, particularly the young.

The PTAA vision, based on the love in the Heart of Christ as expressed in the Gospels, is to help build a society where people can live to their full potential and alcohol can be enjoyed in moderation, thereby avoiding the many unwanted issues caused in society by problem drinking.

The Pioneer Association is an apostolate of the Society of Jesus under the Patronage of the Irish Episcopal Conference.

The Pioneer’s Spiritual Director, Fr Bernard J McGuckian, SJ speaks about the role of spirituality and faith in addiction recovery and the special charism of the Pioneer Association.

“We are a movement with a difference. For me, the Pioneers is a devotion to the Sacred Heart focused on a particular social evil. It is the other end of the spectrum from that marvellous movement, Alcoholics Anonymous, which is principally for people who have a problem and want to escape from it. The Pioneer Association is for ordinary people who don’t necessarily have a problem but have chosen a way of life that they feel can contribute to a solution.”

“Many people who haven’t direct experience of alcohol but are conscious of the problems it can cause, want to do something. We are not professionals but we support those who are. The Pioneers for instance have been very supportive of the Mother Teresa of alcoholism – Sr Consilio. She appreciates that and is a pioneer herself. She is very much committed to a spirit filled solution to the problem.”

“One of the hopes after this gathering in All Hallows is to see where we can fruitfully engage with others because we feel that we have a message that makes sense. We are trying to deal with one of the vast worldwide problems which is the use of chemical mood changers.” 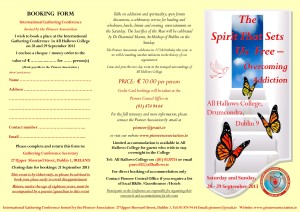 “The theme of the conference: ‘The Spirit that Sets us Free’ from that we want to show that there is a contribution from religion and spirituality to this and that counselling is not a totally horizontal phenomenon, there is the element of the perpendicular to God. St Paul in Ephesians used the expression ‘Do not drug yourself with wine, this is simply dissipation. Be filled with the Spirit’. A person who is genuinely spirit-filled doesn’t feel that there is a lacunae to be filled up, they have sufficient resources in their spirituality to avoid the pitfalls of drugging yourself.”

The Pioneer Association comes out of two aspects of the Jesuit way of life – the spiritual exercises of St Ignatius where you are continually discerning what is the best thing to do at this point in time both in your own personal life and in the life of those around you. Fr Cullen in his prayer came to the conclusion that this serious problem of addiction was the thing to be addressed. 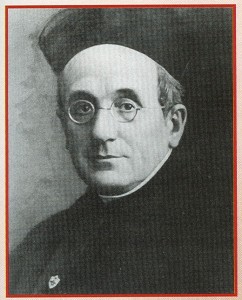 Ever since the Society of Jesus has felt that they have a special responsibility to promote that devotion to the heart of Christ. So in the Pioneers, the Jesuit spirituality, which is a spirituality of choice and mysticism of service, is channelled through the devotion to the Sacred Heart.

The PTAA is very much a grassroots movement. For over a hundred years it has been parish based or school based. Now with the advent of social media, we are able to go worldwide and people can join online.

We are adjusting ourselves to this new world of Facebook and Twitter because all the young people are into that and if you are not in it – you will be left behind.

“In those days there wasn’t the same difficulty for boys as boys didn’t go into pubs – it wasn’t in the culture. If a young fellow went into a pub they would be asking what was he doing there. Therefore, it was relatively easy. But life can present its challenges when you have to make the choice.” And those choices occur throughout a person’s life.

He notes the change since he set up the RAY renewal group for teenagers in the 1970s. “What has really changed in Ireland is the horrendous pressure on teenagers and young adults not only to drink but to get drunk.

“When I started this work first in the 1970s the big preoccupation was teenage drinking but when I came back from Africa at the beginning of the 1990s it was not teenage drinking it was teenage drunkenness – I could not believe my ears. By the time we got to 2000, it had gone beyond this and there was a big problem with drugs. They were beginning to mix alcohol and drugs and young people were drinking to ‘get the buzz’ in the same way as you buy drugs to get a high and this was creating huge problems.”

One of the ways the PTAA promotes in an effort to help teenagers avoid being sucked in to alcohol, drugs and early sexualisation is through promoting integral temperance.

“Alcoholics Anonymous are perfectly right to use the word sobriety because sobriety is one of the dimensions of temperance. There are four: modesty, abstinence, sobriety and chastity. The most important one is chastity. The other three are meant to be supports to chastity.” 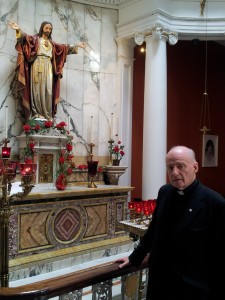 “The whole purpose is to protect this essential virtue for the structure of family life and the basis of the human race: chastity. Sexuality is a gift that has got to be dealt with wisely, as Flannery O’Connor put it marvellously, sexuality leads to serious problems when it is divorced from its hard purposes. One of the reasons that I have been prepared to work so hard in promoting sobriety is that it is a protector of the others.”

One of the ways the PTAA promotes its ideals and spirituality is through its Pioneer magazine, which began in 1948.

“From 1911 until the early 1980s, the Pioneer column in the Irish Catholic was a feature every week. It is regarded as the longest running single feature in any Irish newspaper ever. It was not so essential when in 1948 we started our own magazine, which when it came on the scene first was seen as novel. It is still going over 60 years later – it is our flagship really and we hope to keep it going.”

This movement, which began in Ireland, has spread worldwide and is now found in Africa, South America, Asia and parts of the USA. There are currently Pioneer organisations in:

Keeping the home fires burning is a staff of nine who also service this worldwide organisation. “They are going all day five days a week – without them we just could not run the Pioneers. It is a professionally run organisation so people have to be paid and that is the main reason why we need funds. We have been running the Pioneers on a shoestring for over 100 years and even a shoestring wears out. The Pioneers themselves are generous but seeing as we are trying to provide a service to the whole community we hope that the whole community will support us.”

For more information on the conference: http://www.pioneerassociation.ie/images/stories/pdf/pioneerconference2013.pdf 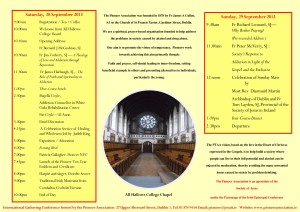