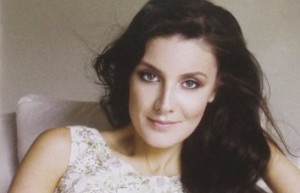 An Irish soprano has said that she is ‘’very excited’’ about performing for Pope Francis next week in the US.

Talented Derry-born soprano, Margaret Keys will sing for Pope Francis next week as he makes his first visit to the USA.

She will perform as part of World Festival of Families being held in Philadelphia on 26-27 September, alongside performers known internationally, including Arethea Franklin, Andrea Bocelli and Mark Wahlberg.

Speaking to the Derry Journal newspaper she said, “I am humbled and honoured to be able to perform at this very special world event and absolutely delighted to be performing for the Pope.”

“It is an ambition of mine that I had always thought would not be possible, and something my late dad dreamed of me doing.”

“I believe my dad continues to guide me in some way, and this performance will be for him; his spirit will be with me as I perform from the Eakins Oval on the Benjamin Franklin Parkway – in front of an estimated audience of 800,000 – 1.2 million.”

Explaining how the opportunity arose Margaret said, “I performed at the Vatican Radio while I was in Rome last year, and I believe that one opportunity leads to another.”

“Performing for the Pope became a greater ambition of mine following my father’s death, and it still doesn’t feel real that it is actually happening. My mum will travel with me to America and it means a great deal to me that she will be there.”

Margaret said her faith is also very important to her.

“My faith is important personally to me and I grew up in a home where faith was around me, and I’m so grateful of that.”

“The Long Tower church continues to play a huge part in my life and I still sing at the Christmas and Easter Mass when I’m at home.”

Pope Francis starts his visit to the USA on 22 September and plans to stop in Washington DC, New York City and Philadelphia. He departs on 27 September.

He will arrive in Washington on 22 September at Joint Base Andrews at 4pm to be greeted by President Barack Obama.

He will attend meetings in the White House with President Obama and make a speech to the Senate and House of Representatives (Joint Session of Congress).

On Friday, 25 September he will address the United Nations General Assembly in New York and will attend a multireligious service at 9/11 memorial and museum at the World Trade Centre.