Home > Featured > Your Pope Needs You!

Your Pope Needs You!

A campaign to enlist volunteers to help with the World Meeting of Families 2018, which takes place in Dublin less than 15 months from now, was launched this week to coincide with National Volunteering Week. 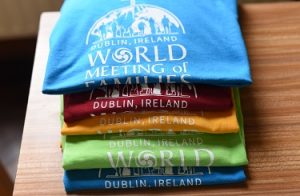 WMOF2018 Secretary General Fr Timothy Bartlett and General Manager Anne Griffin reckon they will need many thousands of volunteers to help with the six-day event in August.

Already, more than 1,500 have expressed an interest in helping, but now there is a formal volunteer application process in operation, accessible via the webpage www.worldmeeting2018.ie/volunteer/.

Volunteers need to be residents of the island of Ireland at the time of their application. The must be aged over 18 on 1 January 2018, although an exception is made for those volunteering as part of a group, where a minimum age of 16 on 1 January next year applies when younger volunteers are part of a group with at least one adult to every ten young people.

Naturally, volunteers should be sensitive to and respectful of the Catholic ethos of the event and they also need to be fluent in English, as all training and management instructions will be in English. Volunteers will also need to undergo a Garda vetting procedure.

Volunteers need to be available for at least four consecutive days during the event, which runs from Tuesday 21 August to Sunday 26 August, with volunteer shifts running for up to eight hours at a time.

Would-be volunteers also need to attend three mandatory training sessions to be held before the end of this year on Saturdays yet to be determined. Training sessions will cover general induction plus specific training on each volunteer’s assigned role and venue.

Volunteer roles range from involvement in providing general assistance to ensure the smooth running of a specific event by acting as an usher or a steward to more specialist roles such as medical services, liturgical services, translation services and transportation.

Volunteers will not be paid for providing help, nor will they have any of their own personal transportation costs reimbursed. However, they will be provided with a lunch each day and will also be given a WMOF2018 uniform (T-shirt), which they may keep as a souvenir.

They will also have the satisfaction of helping to make a success of one of the greatest international events ever to have been held in Ireland. The 2012 Eucharistic Congress holds the record for being Ireland’s biggest ever conference, and WMOF2018 will be much bigger.

This year, National Volunteer Week was on the theme ‘Do Good, Feel Good’, to emphasise the fact that there are many personal benefits to volunteering – helping others is good for mind, body and soul. So sign up now for WMOF2018. Who knows, you might spend most of the day standing beside His Holiness Pope Francis!