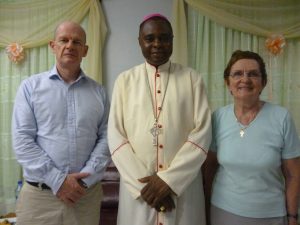 An Irish nun and English professor have boosted Nigeria’s native yam production and the livelihood it provides for small farmers with the help of modern crop science.

This story has been detailed in a new book, Food Most Royal, just published by Sr Nora McNamara and Professor Stephen Morse, who found that supporting the native crop and the communities that produce it also contributes to biodiversity.

“The book is really about advocacy and food security and minding our planet. We are telling that story through the yam, which was an endangered crop,” Sr Nora McNamara told catholicireland.net.

Sr Nora has spent over 35 years in Nigeria, where in 1970 she initiated the Diocesan Development Services of Idah to improve social and economic conditions in the deprived region by creating sustainability in agriculture. Sr Nora and her team, including Professor Stephen Morse, found there were problems with growing the native yam, which suits Nigerian soils, is nutritious, and can be sold at a good price.

“[In the book] we are appealing to the public not to take the short-term preference, which is expediency, but to have a good look at the long-term effects of producing crops that have low nutritional value and low economic value and have a major impact on the soil and environment compared with indigenous crops,” she said.

A member of the Missionary Sisters of the Holy Rosary, Sr Nora found there was a shortage of what she called “healthy clean seed yams”, which were often bought in the next state and had to be transported a great distance, making them expensive.

She and the team encouraged farmers to grow their own seed yams and understand and organise better storage for them. The yam tuber is similar to the potato, and some tubers are stored from one year’s crop as seed or ‘setts’ for the next year’s crop.

They found a special pesticide cocktail that stopped deterioration of the seed yams due to disease during the storage period. They were careful to analyse it to ensure it left no residue, which might be harmful to human health. The pesticide cocktail also prevents yams from succumbing to disease when planted in the soil.

“We haven’t introduced anything extraordinary – we merged new scientific findings with a traditional system and married the two,” she explained.

They worked with local farmers, helping them to adapt to different situations and use the correct variety of yam to suit the local soil and other conditions and markets. The farmers improved crops by planting in land that had been fallow, or in richer soils, so as not to waste the valuable seed yams and to get the best crop. They also learned new planting systems such as ridges.

“The farmers have a great amount of knowledge and that will be lost unless we put it all together and use it,” she said. She explained that farmers have no problem understanding the science-based changes now, but they were wary at first.

Now she wants to see more women involved in planting yams, which are considered a ‘man’s crop’. Behind all the work is the desire as a Holy Rosary sister to help the people “at the bottom of the pile”, as she puts it.

She now lives in Ireland but returns to Nigeria several times a year, which means that the local people run the project and she and Professor Morse offer what is not available locally such as research and science behind crop production.

This has not gone unnoticed, and Dr Utiang P Ugbe, the founder and CEO of Development Input Ltd – an economic development consulting firm based in Abuja, Nigeria – describes her work on yam production as “pioneering” and states that it is empowering people and freeing them from the “bondage of poverty”. 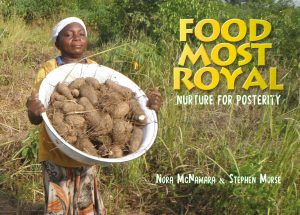 The foreword of the book is written by Darina Allen of the Ballymaloe Cookery School in East Cork, who highlights the need to preserve biodiversity by saving seeds and “seeking out crops that will flourish in a changing environment”.

Sr Nora is a native of Lisselton, Co. Kerry. As a member of the Missionary Sisters of the Holy Rosary she worked for over 35 years in Nigeria. Back in Ireland, she served on the board of Misean Cara, and was Missionary Development Officer for her congregation.

Professor Stephen Morse is Chair of Systems Analysis for Sustainability at the Centre for Environmental Strategy in the University of Surrey. He and Sr Nora have been working together since 1980, and have collaborated on six books as well as many journal articles.

Food Most Royal costs €20 and can be purchased at www.onstream.ie.