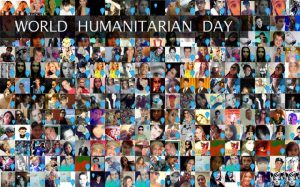 On World Humanitarian Day, (Friday 19 August), Christian Aid is paying tribute to aid workers who face significant dangers and difficulties as they provide relief to people caught up in crisis zones.

An annual initiative of the United Nations, World Humanitarian Day aims to recognise the women and men risking their lives on a daily basis to deliver aid during conflict, emergencies and disasters.

Christian Aid has taken this opportunity to highlight the challenges facing its staff and partners in South Sudan, home to one of the world’s biggest humanitarian responses.

The charity is also calling for 25% of global aid funds to go directly to local organisations, who are often on the front line of relief efforts.

At least 57 aid workers have been killed there since the conflict began in December 2013. Many more have faced harassment, with South Sudanese nationals most at risk of being targeted.

In June 2016, a staff member from one of Christian Aid’s local partner organisations was shot and killed when civilians were attacked in the town of Wau.

In July, South Sudanese women and expatriate aid workers were violently assaulted in the capital, Juba, it emerged this week.

Rosie Crowther, Christian Aid’s emergency programme officer for South Sudan said, “The humanitarian situation in South Sudan has deteriorated rapidly in recent months. As the scale of need continue to escalate, so do the challenges facing humanitarian workers – both South Sudanese nationals and those from overseas.”

“Over the years, our local partners have responded courageously, working in remote, hard-to-reach areas, and staying with communities even when other agencies have pulled out due to security issues. In some situations our partners have even moved with displaced local populations, so that they can continue to provide assistance.”

“The cost of this work is incredibly high: aid workers have been harassed and attacked in South Sudan. Tragically, one of our partner organisations recently lost a staff member, who was killed in the town of Wau.”

“During last month’s clashes, some of our partners had their compounds looted and facilities destroyed, while some of our staff and partners were forced to abandon their homes amid the fighting – many sought refuge in church compounds.”

Ms Crowther continued, “Despite the adverse conditions, our staff and partners remain committed to supporting those caught up in conflict and disaster: our local partners are often among the first to respond and the last to leave in times of emergency.”

“The same is true in many other countries. On World Humanitarian Day, we pay tribute to the individuals who put their lives on the line, week in, week out, to help those struggling to survive.”

Some 6.1 million people in South Sudan urgently need humanitarian aid: 2.4 million citizens have fled their homes amid ongoing fighting, tens of thousands have died and numerous human rights atrocities have been committed against civilians.

Up to 5.3 million people are at risk of severe food shortages. Christian Aid works through local partners to support some of the most at-risk populations.

The vital role played by local and national groups in South Sudan’s humanitarian response was recently highlighted in the Missed Out report, published earlier this year by Christian Aid, Tearfund, Oxfam, and CAFOD and Trócaire in partnership.

Under the banner of ‘One Humanity’, World Humanitarian Day 2016 will see the UN and its partners demanding greater global action for the 130 million people affected by conflict and disaster worldwide, and who depend on humanitarian assistance for their survival.

Christian Aid is running an appeal for South Sudan. To find out more, visit: http://www2.christianaid.org.uk/emergencies/south-sudan-crisis