“We need to stamp out the stigma that still exists around HIV, a stigma that is no longer acceptable in our modern society,” said the Lord Mayor of Dublin Christy Burke, who marked World AIDS Day yesterday.

The Mansion House was lit in red from early morning, along with other cities worldwide, to highlight the continued existence of HIV and AIDS in Ireland and worldwide.

The main focus of the Mansion House event was the launch of the ‘HIV – Our Responsibilities’ booklet.

It states: “People living with HIV each want to be treated as a human being, just like any other human being.”

They also want to be part of communities, contribute to society, and be treated equally and fairly. They do not want to be seen as victims. Society should not perceive them as a threat, the booklet states.

The HSE’s Health Protection Surveillance Centre statistics show that 344 people were newly diagnosed with HIV in Ireland in 2013.

For the first half of 2014 there were 205 new cases diagnosed and by the end of the year that is expected to rise to one every day in 2014.

“It’s time for us to redouble our efforts, to fast-track our actions, and to make sure we are quickening the pace,” UNAIDS Executive Director Michel Sidibé said speaking in global terms on World Aids Day. 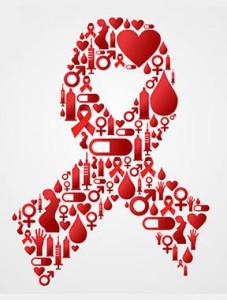 Irish aid agency Trócaire has been involved in the fight against aids for decades.

The Irish charity and the Malawi Interfaith AIDS Alliance project proved a godsend for Edrina Kenamu who was married at 19.

“When I married, my husband was going out every day” she said. “I knew he was cheating on me. I was scared because our family was at risk of HIV infection.”

And as women are usually first to learn their HIV status, a HIV diagnosis sometimes leads to new or increased intimate partner violence. The result is a spiral of fear and isolation.

Edrina and her husband now encourage community members to end violence against women.

They live together harmoniously, having been helped by Trócaire, which states there will never be an end AIDS without an end of violence against women. It will take whole communities and societies to achieve this.

Caritas Internationalis, which Trócaire is associated with, has emphasised Pope Francis’ call to all Catholics, and other people of faith and good will, to open their hearts to all in need and to treat them as sisters and brothers.

“Ours is a response that is measured, not only in realising expected outcomes, but also by the greater enjoyment of human dignity among persons living with or affected by HIV,” stated Michel Roy, Secretary General of Caritas Internationalis and Msgr Robert J Vitillo, Head of Delegation to the United Nations in Geneva and Special Advisor on HIV/AIDS and Health.

In an article they continue: “Ours is a response that reaches out with compassion and tangible support to countless widows, orphans, and other surviving loved ones as a way to honour the memory of some 39 million people who have died from AIDS-related causes during the past three decades.”

Caritas walks with rather than “doing for” HIV-positive persons, as they empower themselves to live fully despite the challenges they face as a result of the virus.

The charity has called for a change in the structures that prevent some 25 million adults and children from accessing life-saving anti-retroviral medications.

Priority should be given to the HIV-infected children as there needs to be more “child friendly” medicines so they can live beyond their first or second birthdays.

Finally, the charity called on everyone to reject discrimination and stigma towards those living with or affected by HIV.

“Let us base our ‘roadmap’ for Caritas’ ongoing commitment to the global HIV response on this appeal of Pope Francis: … we must open ourselves to the peripheries, also acknowledging that, at the margins too, even one who is cast aside and scorned by society is the object of God’s generosity,” they state.

Worldwide more than 33 million people have been diagnosed with the HIV virus.