Home > News > WMoF not fazed by “Nope to the Pope” campaign

WMoF not fazed by “Nope to the Pope” campaign 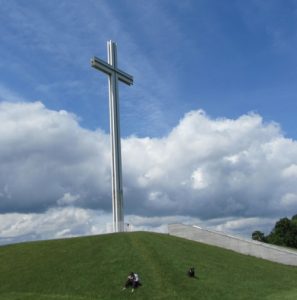 The World Meeting of Families is confident that a campaign against the Pope will not derail the papal visit to Ireland.

A spokesperson for the WMoF2018 said it has robust systems in place to check all bookings, and there will be a number of verification requirements before people actually receive a ticket.

Brenda Drumm was speaking after a campaign, “Say nope to the Pope”, was launched, urging people to book tickets online and then not show up for the event. On Tuesday’s Liveline, Richard Duffy said that a “few hundred people at least were getting 50 tickets each”.

Mr Duffy said the campaign’s aim was to “drive home the message that people in this country are not happy with the Catholic Church and this is a way of expressing that.” In response, another listener, Gerry McArdle, said their actions were “cheap, petty spiteful, nonsensical”.

“I can’t believe a grown man would behave this way,” he said. “The man [Pope Francis] is coming as leader of 1 billion people and to insult him like that, we’re showing ourselves up.”

More than 5,000 people have expressed interest on the Facebook event, according to Mr Duffy, who said one member had booked 1,300 tickets which will go unused.

However, Ms Drumm told CatholicIreland that the request for tickets for all the World Meeting of Families 2018 events had been overwhelming. “Within a 48-hour period almost 400,000 tickets for the Phoenix Park alone have been booked.” As of 9am yesterday, the figure stood at 420,000.

“It is disappointing that some people would try to undermine the right of ordinary families to go to Mass with the Holy Father, showing little respect for the right to religious freedom. However, the WMOF2018 is confident that it has robust systems in place to check all bookings and there will be a number of verification requirements before people actually receive a ticket,” she said.

Ms Drumm added that WMoF was not overly concerned by the relatively small number of bookings. “This was not unexpected with an event of this scale for which tickets were free.”

Earlier in the week, Taoiseach Leo Varadkar described people who applied for tickets with no intention of going as “petty and mean-spirited”.

“Protest is legitimate and okay, but denying other people the opportunity to attend a mass or an event is not legitimate protest in my view and is most unfair. It should be condemned,” he said. An online poll by the Journal.ie showed 71 per cent believed it was wrong to bin tickets for the Pope’s visit to the Phoenix Park.

According to the organisers, the WMOF2018 Pastoral Congress in the RDS from 22 to 24 August is now fully booked out, with a record-breaking 37,000 registrations from 114 countries. “We are working hard now to make the WMOF2018 a joyful and welcoming event for all those attending,” said Ms Drumm.

Meanwhile conservative group the Lumen Fidei Institute will host a parallel conference the same weekend as the World Meeting of Families. Calling on Catholics to “rise up and defend traditional Catholic marriage and family life”, the Conference of Catholic Families takes as its starting point the encyclical of Pope Pius XI, Casti Connubii.

Lumen Fidei objects to some of the speakers presenting at the WMOF, notably Fr James Martin who will speak on how parishes can reach out to LGBT Catholics.