Witness to Knock apparition to be buried at NY Cathedral 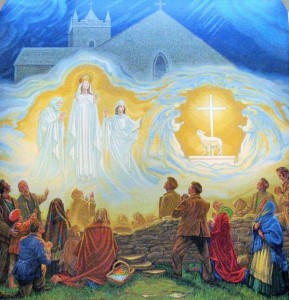 John Curry was just five years old at the time of the apparition in 1879. The account he gave afterwards to the Commission of Enquiry merely records: “The child says he saw images, beautiful images, the Blessed Virgin and St Joseph. He could state no more than that he saw the fine images and the light, and heard the people talk of them, and went upon the wall to see the nice things and the lights”.

John Curry’s reinterment will take place on Saturday 13 May during the first pilgrimage from Knock to New York. For the last two years, Knock Shrine and Ireland West Airport have welcomed pilgrimages from New York and Boston. Now it is time for a return pilgrimage, with people from Knock and the West and North West of Ireland taking part in a seven-day trip led by Fr Richard Gibbons, P.P. and Rector of Knock Shrine.

Speaking to CatholicIreland from the States, Fr Gibbons explained that when he became Rector of Knock he was anxious to find out where the fifteen witnesses to the apparition were buried. Through a book written by the grand nephew of John Curry, Fr Gibbons found out that his forebear had been buried in Long Island. “He knew exactly where the grave was but there was no headstone,” said Fr Gibbons.

Two years ago, when Cardinal Dolan led the first transatlantic pilgrimage from New York to Knock, Fr Gibbons broached the subject of John Curry. “I said to the cardinal. ‘If I get a headstone and put it over the grave will you come out and bless it with me?’ To which he [the cardinal] replied, ‘We’ll do something better than that – we’ll bring him into St Patrick’s.’  So that was a massive thing.”

It is not possible to bury the remains of John Curry in the present cathedral, but he will be in the grounds of the old St Patrick’s Cathedral, “in Little Italy half way down Manhattan island”.

Records show that John Curry lived most of his life in the United States, where he ended up living with the Little Sisters of the Poor in Manhattan. In 1937 he was one of only three surviving witnesses interviewed by the Second Commission of Enquiry. “He was exact about what he saw and then he died in 1943,” said Fr Gibbons.

According to the Rector of Knock, ten of the fifteen witnesses to the apparition are buried in Knock, and two others in nearby parishes. But the location of the remains of two witnesses – Patrick Hill and Mary McLoughlin – remains a mystery. Mary McLoughlin was the housekeeper to the parish priest, the Rev. Archdeacon Cavanagh. “It is assumed she left Knock after the parish priest died and went back to Westport where she came from and perhaps was buried there, but there is no record,” said Fr Gibbons.

The Knock to New York trip will depart from Ireland West Airport on Monday 8 May direct to JFK and return on Sunday 14 May. The trip, for up to 177 people,  costs around €2,000 for flights and accommodation in a four star hotel in Manhattan. Pilgrims who have family or friends in New York can be part of the trip and just pay for the flights.

The remains of John Curry, the youngest person to witness the Knock Apparition on 21 August 1879, are currently interred in Pine Lawn Cemetery, Long Island. A special requiem Mass will be celebrated for the reinterment.

“It is a great honour bestowed by the Archbishop of New York for Knock Shrine and for John Curry’s family to have his remains transferred to the historic centre of the Irish,” said Fr Gibbons, who said the historic trip had a twofold significance. “It will recognise John Curry’s place as a witness and native of Knock and also pay tribute to others like him, the ‘forgotten Irish’ who faced the desolation of leaving home never to return.”