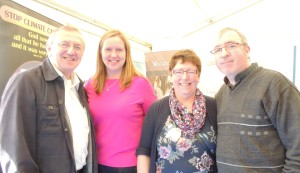 This generation of young people are both open and ask challenging questions according to Vocations Ireland.

“Young people are not afraid to come up and chat to you and ask questions. They say what’s on their mind,” said Margaret Cartwright, director of Vocations Ireland who attended her first Ploughing Championship on Tuesday.

On the stand people could write a wish such as ‘peace’ or ‘hope’ or ‘forgiveness’ on a bean and plant it – as a symbol of sowing seeds for the future.

The seeds will grow and be kept in the Vocations Ireland office.

The many young people who were at the ploughing with their schools or families were able to pick up a wristband or get a ‘selfie’ or family photo next to the old style plough or chat while learning to make a St Brigid’s cross.

Another activity was to leave their fingerprint on a picture of a tree and pledge to do something about climate change.

“I found they are really searching for something. Their questions are quiet challenging, they are really into the whole justice issue, and climate change,” said Margaret Cartwright who will have been with Vocations Ireland a year in November.

While it was a year of listening and observing and seeing where the real needs are, work has already started to help vocations directors up-skill.

Samuel groups have also been started and many more will start around Ireland. These are groups where young people, together as a community, discern their way in life – be it marriage, religious life or priesthood.

The participants have time for reflection and are encouraged to do voluntary work and to give up something like the internet or TV one night a week.

If they want to go on to discern a vocation to priesthood or the religious life they can undertake the well established ‘ExploreAway’ programme.

Margaret Cartwright doesn’t have vocations figures for the full year yet but she feels that there “a turning of the tide” with more people going to stay with religious communities or taking the first steps towards joining them.

As religious do not always wear habits anymore or teach in schools or work in hospitals they have to find new ways of showing the great work they do in areas such as helping the homeless or working with alcoholics.

“We need to find another way to tell the story of what they are involved in now,” she said.

The ploughing is one such opportunity and sisters, brothers and priests were present on the stand to engage with people.

Kay Mulhall is a Brigidine and she was teaching people how to weave the St Brigid’s cross while chatting to visitors. 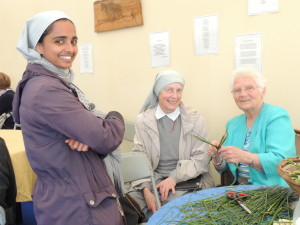 Juli Thottungal and Lucyna Wisniowska, Sisters of St Peter Claver, and Kay Mulhall of the Brigidines who is weaving a St Brigid’s cross.

Originally from Laois, she spent many years in Mexico.

Now she is living in Old Bawn in Tallaght where she set up an intercultural drop-in centre. People from all over the world living in Dublin visit the centre.

They have come from places like Afghanistan, Poland, Nepal, Hungary and the Congo. Up to 20 lay volunteers – teachers, nurses, doctors and other professions help out.

“When I left to go to Mexico in 1985 we were a mono-culture in Ireland, and in 2001 when I came back I saw we were a multi-culture,” she told CatholicIreland.net.

“I was interested in giving a welcome to people who had come to our country.”

So now the centre is funded and has CE scheme workers as well as the volunteers.