Youth ministry is a vital factor in promoting vocations according to a recently published study. Prepared on behalf of Vocations Ireland, the study highlights the significance of producing a “spiritual literacy” that connects and reassures young people and which creates groups, weekends, and daily spaces for them.

In its conclusions, “Religious Vocations in Ireland – Challenges and Opportunities” by Dr Noelia Molina, references a “post-secular generation which is not particularly interested in institutions but is open and receptive to spiritual authenticity and genuine narratives of experience.” It states that the main challenge in vocations is to respond to the call of the times to keep connecting and relating to younger people.

One vocations director voiced the challenge, “It is irresponsible to give up. I don’t know but perhaps all of these changes have to happen within ourselves and our own willingness to change and be opened to a new way of doing things.”

The study which dealt with a variety of Catholic religious orders in Ireland, involved 16 interviews with vocational directors, promoters and young religious people who are very hopeful about the future. Fr Alan Neville, MSC, writes in the Vocations Ireland Newsletter October 2017 that the findings of the research make for “unsettling” reading, because most young people are disconnected from the Church and that does not bother them.

“Our absence from schools, hospitals, and parishes goes largely unnoticed,” he writes. “We on the other hand have lost ourselves in rhetoric of managing decline and gratitude in diminishment.”

He poses the question how religious can enter the space of the iGeneration and millennials and their disconnect with religion with a message that can be seen as out of date while religious believe it to be timeless. He feels religious orders have the best stories of faith and radical witness, and need to share and celebrate these in a way that can be understood today.

“Hope can replace fear,” he concludes. “The prophetic witness of religious life can help us to reclaim our spiritual narrative and build a Church for tomorrow, but only if we really want it.” 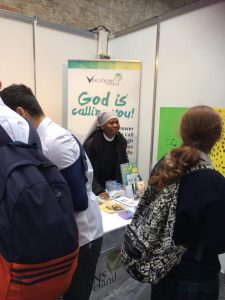 While acknowledging that the report had fewer responses than hoped for from those targeted in the surveys and limited time for analysis, the study author states that, to her knowledge, it is the only study in Ireland in which vocational directors and young religious were interviewed.

Of the six young people interviewed, five were novices or in temporary vows and one had made perpetual vows. On their first crucial encounter with an order, many were impressed. One said, “I prayed about it, then I googled and emailed them. There was no name, no photo on their website just a “contact us” button at the bottom. I did not know who to address the inquiry. Then we met, and I thought the person I met was very interesting and I wanted to go back.”

Many spoke of the importance of reading blogs, magazines and seeing You Tube videos of other’s experiences of their calling and religious life, but also of the need to meet with people who are in the same boat as them.

They also said that today’s young people have not experienced the abuse scandals, and that they do not measure percentages of mass attendance but want to live in a Christian way. On the generation gap some spoke of their sadness in going to so many funerals of older members of religious orders that they had good relationships with. Some felt they  didn’t want to be living with older people 70’s and 80’s.

Others spoke about how they had lived life with their own apartment and job before joining the religious order, and found they were treated like 18 year olds when they started living in community.

The study highlights areas for further research including apostolic sisters who seem to be in a more “vocational crisis” than other orders in Ireland. These sisters are in a transitional space having left the tried and tested, and have not yet replaced it. One apostolic sister interviewed said that if she were starting over she would now enter a contemplative order.

Youth ministry and modern technology including blogging were also listed as other areas for research. For example, American novices write a blog about their experiences.

As part of the on-going work with vocations directors and other interested people, Vocations Ireland in partnership with the NRVC, and part sponsored by the Conrad Hilton Foundation are offering workshops next year.

For workshop details and the vocations study see: www.vocationsireland.com