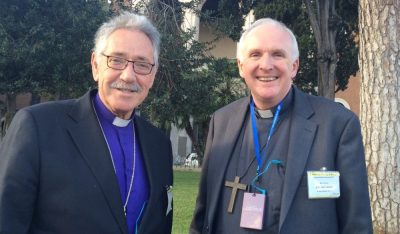 The Catholic Bishop of Limerick, Brendan Leahy, and former Church of Ireland Bishop of Limerick and Killaloe, Trevor Williams, jointly addressed an ecumenical meeting of bishops in Sigtuna, Sweden on the topic of ‘Reconciliation’ last week.

Pointing out that one in four lives in Northern Ireland is still affected today by the years of the Troubles, Bishop Leahy said a spiritual turmoil lay within the Irish soul “crying out for reconciliation between members of different religious-cultural communities, reconciliation of memory for victims/survivors of violence and abuse, reconciliation with ourselves as we move forward as an island into new political, social and cultural interactions with one another”.

“What are the ways the Spirit is unleashing the power of reconciliation?” he asked.

In answer he said the Holy Spirit was giving Christians the courage to accept and name the “reality of suffering, abuse, pain. It is never easy to face the truth,” he continued, “but the Truth sets us free.”

To illustrate this he cited a story a friend told him. She was on her way to the Papal Mass at the Phoenix Park. Sitting beside her on the bus was another woman whose mother had suffered abuse, travelling to the counter-demonstration.

“Her mother had been so damaged by her abuse that it ruined the life of the family. She told my friend: ‘The worst part of it is that it robbed me of the Church.’”

His friend listened in silence. “As they parted, the woman said: ‘You go where you have to go and I where I am going … but we’ve met and understood each other.’ Naming, listening, not rushing,” he told bishops from 12 churches and 5 continents at the Focolare Ecumenical Meeting of Bishops.

Church of Ireland bishop Trevor Williams spoke of his experience with the ecumenical Corrymeela Community in Northern Ireland. “The key to overcoming division is to be found in meeting across the divides, sharing our stories with others from different backgrounds, and by attentive listening to ‘them’,” he said.

As a leader of Corrymeela in the nineties, he recalled welcoming two classes of 16-year-old students – one from a Catholic school the other from a Protestant school. On the second evening the students were divided into small groups of four Catholics and four Protestants. The topic was ‘How the troubles have affected my life’.

“One girl spoke about how her father was killed by the IRA because he was a member of the RUC, another how her brother was killed because he was a Catholic. And so it went on,” recounted Bishop Williams. “At the end of the very long session there were tears, and then spontaneously the group got to their feet and fell into each other’s arms. Catholics comforting Protestants, Protestants comforting Catholics.”

The truth is that the future will include those we now call enemies, said Bishop Williams. “We live in a world of ‘them’ and ‘us’.  The truth is there is only ‘Us’. Revealing this truth is the work of Reconciliation, the work of the Holy Spirit,” he concluded.

Asked by a bishop from the Holy Land how not to allow ‘conflicting narratives’ from both sides in a conflict to create even more division, Bishop Williams said that each person sees from his or her own perspective. “We tell stories to justify ourselves.”

He recommended people meeting each other in private to create a sense of safety. “It seems that when we share our story as human beings, when we allow ourselves into a position not of power but of vulnerability in the presence of the enemy, something really new happens. That is our experience.”

During the five-day gathering, Maria Voce, President of Focolare, addressed the bishops. Quoting Chiara Lubich, she said that a Church built with bricks “but with nothing that binds them to one another, is a bit precarious”. The cement was mutual love, she said – “all being one soul. In fact, Jesus said, by this they will know … if you love one another.

“Our responsibility is to live mutual love in a radical way so that Jesus himself can be present among us, and his Spirit with him. That is why we can hope that all of us, whether we are older or younger, and whatever reality we are immersed in, will be bearers of the Holy Spirit, so that the divine may shine out not only in the Church but in the part of the world that in some way is entrusted to us.”