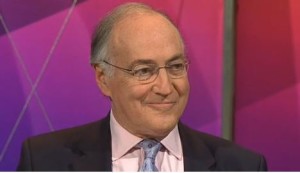 The former Conservative party leader, Lord Michael Howard, has spoken about the “lavished, gentle, loving care” his father received at the end of his life from a group of “selfless” nuns.

Speaking as part of a campaign to gain funding support for hospice care, Lord Howard told CatholicIreland.net that he does not recall the name of the order of nuns that cared for his father, who died at just 49 in 1966 in Llanelli (then known as Llanelly) in South Wales.

The Howard family are Jewish. Lord Howard recalled that the nuns’ “selflessness far exceeded any praise I could bestow upon them.”

In London launching a new programme to improve care at end of life he said, “Hospital has become the default option for dying people and for an increasing number of frail elderly people. Hospital should be the last resort at the end of life, not the first one.”

Lord Howard, Chair of Help the Hospices, called on the Government to transform care for dying people by backing the charity’s programme which aims to cut the number of people dying in hospital by 50,000 each year.

That is one fifth of the total annual hospital deaths in the UK.

Help the Hospices believes this will lead to higher quality, better targeted care for dying people and could generate savings of up to £80m per year for the NHS.

Lord Howard said that hospital care as the default option “fails to support dying people’s actual needs and deprives them of alternative care options. It also places considerable pressure on the NHS, which is already straining at the seams.”

He said that hospices can provide the solution with alternative forms of care, either through inpatient units or working closely with their local hospital to deliver alternative options.

“This will help ensure that people do not have to remain in a hospital bed at their end of life unnecessarily. It will result in better targeted, higher quality care for dying people,” he said.

The new initiative will offer people increased choice about where they die, in line with their personal preferences.

At present just over 500,000 people die in England and Wales each year, with around half of them dying in hospital.

Often, people who die in a hospital setting have no clinical need or wish to be there and the number of people dying each year is beginning to rise. Research shows that more than 80 percent of the public would prefer to die at home or in a hospice.

There is a lack of relevant skills and awareness among doctors and other healthcare professionals about palliative care.

Help the Hospices’ new programme will be aimed at dying people who often fall through gaps in the care system and remain in hospital at the end of life because alternative options, such as hospice care, have not even been considered.

Help the Hospices wants to form a partnership between the NHS and the hospice movement to fund six nationally co-ordinated pilot projects to evaluate the impact of hospice-led interventions in reducing unnecessary deaths in hospital that will begin in April 2015.

Following completion of the pilots, the programme will be rolled out nationally from April 2017.

In Ireland, 29,000 people die each year and as many as 290,000 are left bereaved, according to the Irish Hospice Foundation (IHF).

In mid-July, the IHF welcomed the report from the Dáil Committee on Health and Children which calls for the development of a national strategy on palliative care, end of life and bereavement.

IHF Chief Executive Officer, Sharon Foley, said she hoped the Government will act on the findings of the report and put palliative and end of life care at the top of health and other policy agendas.

She commended the Dáil Committee for the hearings saying “a great service” had been done for the country.

International research shows there is an estimated €1.3 billion being spent on end of life care every year, but this spend is largely unplanned and uncoordinated.