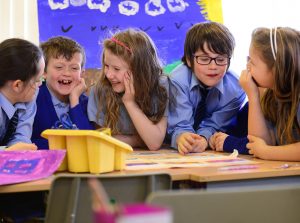 Desertmartin is currently a Church of Ireland school, while Knocknagin is a Catholic Maintained Primary.

While there are a number of integrated schools in Northern Ireland there are currently no jointly-managed faith schools of this type.

The proposed new school would be faith-based and have a Christian ethos. It would have a clear policy on how worship is conducted within the school, and how RE is taught.

The staff and boards of governors of both schools are behind the move, and parents of pupils are now being consulted about the plans.

The clergy behind the negotiations had been inspired by a school in Liverpool, Hope Academy, which was formed in 2011 by merging Catholic and Anglican schools.

The Transferors Representative Council (TRC), which represents the Presbyterian, Methodist and Church of Ireland denominations, and the Council for Catholic Maintained Schools (CCMS) also support the proposal.

If parents and the wider community are supportive, a development plan will then go to the Department of Education. It will ultimately be up to the education minister to decide to allow the plan to go-ahead.

Knocknagin Primary currently has 53 pupils, while Desertmartin has 23 pupils.

Both schools have worked closely together on shared education projects for 10 years. They already teach some classes jointly and their pupils take part in a number of shared activities.

There is only one school in the Republic of Ireland, in Co Laois, jointly run by the Protestant and Catholic churches.

Speaking to the BBC, Jim Clarke, the Chief Executive of CCMS, said that they were “committed to pursuing the concept of joint faith schools and were very supportive of the project in Knocknagin and Desertmartin.”

Dr Peter Hamill, from the Church of Ireland Board of Education, has been assisting the schools. “The churches want to preserve high quality education,” he said.

“They see that can be done very well in a faith ethos, where Christian values are being maintained.”