Féile Bríde celebrates its 25th anniversary this year in Kildare. In honour of Brigid, the festival is a week-long series of events from 29 January to 5 February 2017.

“They come to welcome the beginning of spring. They come to Kildare because it is the home of Brigid, whose feast day is 1 February. Brigid is the goddess of love, poetry, justice in pre-christian Ireland, and she is the patron saint of Kildare,” stated Luka Bloom, the well-known singer and Kildare native.

“It is not a big trendy festival, but a gathering of people who want to celebrate the coming of spring, and who want to call Brigid’s qualities into the world, to light a spark for change,” he said.

“And every year we gather to welcome the light into our world; and to hope that more light will shine in the world; and that some day out of the darkness of war, hunger, greed, poverty, will come the light of community, sharing, justice, music, dance, peace and love.”

This year the festival focuses on the theme ‘Light: A New Awakening’. The Afri Conference which is part of the festival starts with a gathering at St Brigid’s Well and a reflection on 25 years with Sr Rita Minehan, a Brigidine sister, and Joe Murray, Co-ordinator, Afri. It concludes with the experience of refugees and asylum seekers in Ireland.

Stating that for 25 years the Féile Bríde light has illuminated many subjects such as war, climate change and forced migration, which are as relevant as ever, he posed the question: “How can we transform this vicious circle of darkness into a virtuous circle of light?”

He said the question will form the basis of Féile Bríde this year.

“There are many examples of transformation at work. We see it in the presence of the Brigidines and Cairde Bríde in Kildare, the residents and activists demanding justice for homeless people in Apollo House …”.

He went on to list others such as the anti-war activists at Shannon Airport, those who tackle climate change and the various speakers at the conference, including Alistair McIntosh, who wrote Soil and Soul, Kathy Kelly, a US peace activist, and Dave Donnellan, video producer. 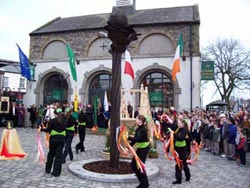 Féile Bríde incorporates a peace and justice event, workshops, rituals and prayer – a mix of pilgrimage and peace issues, secular and sacred.

The celebration of Eucharist and other creative rituals are conducted in the local churches. The pilgrimage and ritual at St Brigid’s Well on 31 January draw hundreds of people from near and far. The customs associated with Brigid are celebrated. Artists entertain those who come to a feast of poetry, music, song and céilí (Irish dancing). The concluding Eucharist is held at St Brigid’s Well, just outside Kildare town.

Brigid’s Way, which has recently become the 13th National Pilgrim Path in Ireland, is to be presented at the festival.

This nine-day pilgrimage from Brigid’s Well in Faughart, County Louth to her well and Solas Bhríde in Kildare will feature in a video, and there will be an announcement as to the details of the National Pilgrims Path Day Walk on 4 April in Kildare. For more information on Féile Bríde see www.solasbhride.ie/feile-bhride-2017.