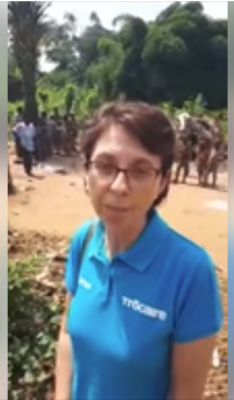 The Ebola outbreak in the east of the Democratic Republic of Congo (DRC) is a crisis within a crisis. This is according to Trócaire, whose Head of Humanitarian Programme, Noreen Gumbo, has visited the DRC. She reported that in the villages of the north-east of the DRC, the damage done by conflict and extreme poverty is all too apparent, and now there is the threat of Ebola.

The first case of Ebola has been diagnosed in the city of Goma, and the World Health Organization (WHO) last week declared the outbreak a “public health emergency of international concern”.

This declaration is on the more severe end of the scale and has only been called four times before. The size of the city of Goma and its location on the border with Rwanda means the United Nations (UN) has deemed the confirmed case to be a “potential game changer”.

While still in the DRC last week, Noreen Gumbo reported that Trócaire is working with local partners in the east of the country to help prevent the spread of the disease.

“Ebola is mostly affecting the north-east of DRC where there is ongoing conflict with attacks and counter attacks between vying factions,” she stated. “The violence has led to large-scale displacement, with reports of indiscriminate killings, sexual violence and villages being burnt out. Huge sections of the population are inaccessible because it is unsafe, so they are completely cut off and isolated. There are very few tarred roads, so communities are very inaccessible and difficult to reach by car.”

She said Trócaire is targeting 160,000 people in its programme. It is fighting Ebola by spreading the message and teaching people what signs and symptoms to look out for and how to prevent the disease spreading further.

“We are trying to build trust in communities, as that is one of the main barriers for aid agencies. There is a vaccine available but many communities fear the vaccine is poison,” she stated.

Trócaire is working through local community groups and church organisations, which are more trusted in rural areas. This allows the organisation to reach the most isolated and vulnerable communities, who are often forgotten or unreachable.

She gave the example of visiting an indigenous Pygmy settlement, an ethnic group that has traditionally been marginalised in the DRC, and stated that Trócaire is working to make sure they have the information they need to help prevent the spread of the disease among their community. Trócaire also provides clean water and water taps and supports people who have been affected.

Separately a joint statement by heads of agencies* on the Ebola outbreak in the DRC was issued for today (1 August 2019), one year since the government of the DRC declared an outbreak of the Ebola virus disease in North Kivu province.

The statement noted that in the last year there have been more than 2,600 confirmed cases, including more than 1,800 deaths in parts of Ituri and North Kivu provinces. Almost one in three cases was a child. More than 770 have survived.

“The disease is relentless and devastating,” said the statement. “Ebola passes from mother to child, husband to wife, patient to caregiver, from the dead body of a victim to the mourning relative. The disease turns the most mundane aspects of everyday life upside down — hurting local businesses, preventing children from going to school and hampering vital and routine health services.”

The statement called on all parties to the violence in the DRC to ensure that responders can do their work safely and that those seeking care can access it without fear of attacks. They issued an urgent call for much more support from the international community.