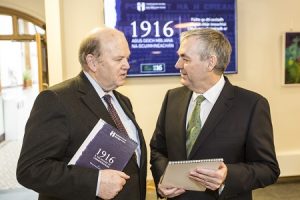 Tributes have been paid to the President of Mary Immaculate College (MIC) in Limerick, Fr Michael Hayes, who passed away this week after a short illness.

Professor Hayes (59) became President of Mary Immaculate College in 2011 when he transferred from St Mary’s College in Twickenham, London. He died on Easter Saturday after a short illness just seven months after the death of his mother, Margaret. He was laid to rest at Mount St Lawrence cemetery following requiem Mass in St John’s Cathedral in Limerick on Wednesday afternoon last.

Paying tribute to his friend, the Bishop of Limerick Dr Brendan Leahy, who sits on the board of MIC, said that “even when ill Fr Hayes managed to see positive aspects in his illness, spending time with family and time for prayer”.

Speaking about Professor Hayes’s time at MIC, Bishop Leahy said: “In the past six years, MIC had become Michael’s life. His work rate was phenomenal. I marvelled at just how much he managed to do and how much detail he managed to master. There seemed to be so many irons in the fire at any one time that I don’t know how he kept on top of it all, but he did and did so with the graciousness and calm that characterised him.”

Michael Hayes was born in Limerick in 1957. His post primary education took place at St Munchin’s College in Limerick and he went on to study at St Patrick’s Pontifical College in Maynooth, before moving to the United Kingdom, where he lived and worked from 1980 to 2011. He was a priest of the Archdiocese of Southwark in South East England.

He took up the post of President of Mary Immaculate College in October 2011. He was nominated to the Teaching Council of Ireland in April 2012 and to the Consultative Forum of Quality and Qualifications Ireland (QQI) in May 2014.

He was an internationally respected academic in the field of pastoral theology, and was particularly interested in the relationship between faith and praxis. He was also a qualified psychotherapist and studied at the London Institute of Psychosynthesis.

Prior to his appointment at Mary Immaculate College, he worked in pastoral ministry in the Archdiocese of Southwark, and later taught in the Department of Theology and Religious Studies at Roehampton University. He became Vice-Principal and Professor of Catholic Pastoral Studies at St Mary’s University College, Strawberry Hill in Twickenham, London, where he had also been Head of the Department of Theology and Religious Studies, as well as the founding Head of the School of Theology, Philosophy and History.

Acting President of Mary Immaculate College, Professor Eugene Wall, paid tribute to Professor Hayes, stating: “Since becoming President almost six years ago, Michael worked relentlessly and with compelling conviction to lead the College with clear-sighted vision through a difficult era for higher education. He was an enthusiastic and passionate champion of the College’s role in the Irish educational landscape and he possessed an unwavering belief that student well-being should be a mainstay of the College’s mission. He spoke earnestly and eloquently of his hope that the enduring contribution of the College would be to contribute to the flourishing of our students’ lives. Michael’s untimely death has come as an enormous shock to the College community and his guiding hand will be sadly missed.”