Tributes paid to Irish nun who died in earthquake 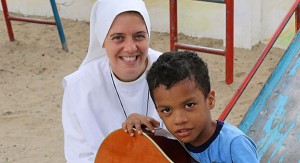 The Bishop of Derry has led tributes to the young Irish nun who was among the 400 people killed in the 7.8 magnitude quake which struck coastal areas of Ecuador on Saturday night.

Derry native Sr Clare Theresa Crockett, who was 33, died along with five postulants of the Servant Sisters of the Home of the Mother when a stairwell collapsed as they were attempting to escape their school building in Playa Prieta. There were no students in the school at the time.

Another Irish nun belonging to the same order, 36-year-old Sr Therese Ryan from Co Monaghan, was in the same building as Sr Clare Theresa when the earthquake struck but managed to escape with a fractured ankle.

Speaking to RTE News, Bishop Donal McKeown described the death of the Derry nun as “terribly sad”, particularly for her family.

He said she would be a huge loss to her order’s ministry on the missions. “I think at a time like this our thoughts are always with those who are most sorely bereaved – her parents, her sisters and those who would have grown up with her,” the Bishop of Derry said.

A former teacher of Sr Clare Theresa Crockett’s said he had never met anyone who had a bad word about her.

Paul O’Hea of Nazareth House Primary School told RTE News that the school community had been so proud when she went on to be a nun. “So, so proud of her and then to hear this news – it is just devastating for everyone,” he said.

Fr Roland Colhoun, formerly of the Long Tower parish who knew Sr Clare said that her family was grief stricken.

Speaking to RTÉ’s News at One, Fr Colhoun said that he knew Sr Clare since her teenage years and he said she was “a beautiful person”.

“She loved God and she died in the line of duty. It’s a very sad end to her fruitful life,” he said.

In a statement, the Crockett family described their daughter and sister as a “superstar”. Friends told the Belfast Telegraph that she lit up a room when she entered it.

Before joining religious life, Clare Crockett had wanted to be an actress and was involved in theatre productions in Derry.

A free 10-day trip to Spain, which was in fact a pilgrimage, sparked her vocation journey and put an end to her weekends of partying and drinking.

The Sister Servants of the Home of the Mother said in a statement on Monday, “Sister Clare had spent nearly 15 years of her life in consecration to the Lord. She was a generous sister with a special gift for reaching out to children and young people.”

The statement said the postulants who died had entered the order just a year ago and were preparing themselves to become Servant Sisters. “And the Lord found them all prepared,” the statement stated.

The Servant Sisters of the Home of the Mother have three communities in Ecuador: one in Guayaquil and two in the Province of Manabí – one of which is in Chone and another in Playa Prieta.

In Playa Prieta, the Sisters ran a school, “Colegio Sagrada Familia”, which offers a human and religious education to over 400 children from the area.

The Sisters’ residence was located on the third floor of one of the school buildings.

At the moment of the earthquake – 18:58 (Ecuadorian time) – the four professed Sisters of the community were inside the building.

Along with the Sisters, were seven young postulants, all of them Ecuadorans.

In addition to their work in the school, the Sisters also carried out humanitarian relief work in the area, especially in response to the state of emergency caused by intense flooding in the days leading up to the earthquake. The flooding left countless families stranded and without homes.

In their statement, the head of the order, Sr Beatriz Liaño SHM recalled that a friend of the community had recently written to them, just days before, commenting his admiration for the Sisters.

“The Sisters are smiling as always, but you can tell they’re exhausted from all the work,” the friend had said.

“As Sisters who sincerely love each other in the Lord, we mourn the loss of our Sisters,” Sr Beatriz Liaño said and added, “However, our faith assures us that ‘death is not the end of the path’.”

The nuns concluded their statement by asking for prayers for their Sisters and their families.

“We do not want to enclose our hearts in our own suffering, but to embrace the pain of the entire Ecuadorian people. We ask the Lord to help them not to be scandalised by their affliction; we ask Him not to allow them to depart from His side. May these moments inspire them to abandon themselves into His hands more than ever, trusting in His love for them.”