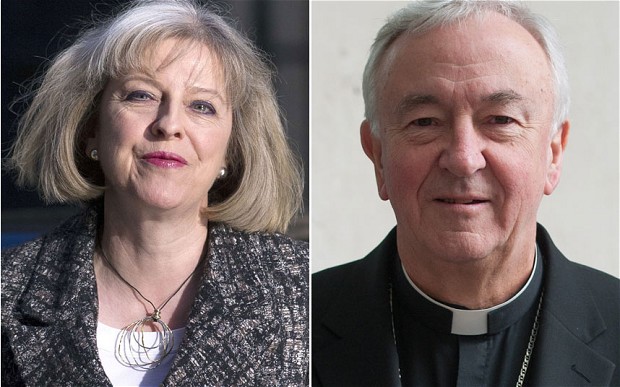 An international conference on human trafficking promoted by the Bishops’ Conference of England and Wales is underway in the Vatican.

On the first day of the two-day conference, the cooperation between women religious and London’s Metropolitan Police in combating human trafficking was hailed as a development of enormous importance and yielding great results.

The hope is that this experience can be repeated in other countries as well, the Archbishop of Westminster, Cardinal Vincent Nichols, suggested.

Cardinal Nichols is chairing the conference, entitled ‘Combating Human Trafficking: Church and law enforcement in partnership’, which is being promoted by the Bishops’ Conference of England and Wales.

The conference at the Academy of Sciences building in the Vatican began with a welcoming speech by the Vatican Gendarmerie chief, Domenico Giani.

Pope Francis has forthrightly condemned human trafficking on more than one occasion. The illicit trade involves almost two and a half million victims.

According to estimates provided by the International Labour Organisation, the phenomenon adds 32 billion dollars to the coffers of criminal organisations each year.

The conference will end today with a papal audience and aims to present the framework of cooperation between the Vatican and police forces against human trafficking.

On Wednesday, the conference heard speeches from the Archbishop of Abuja, Cardinal John Olorunfemi Onaiyekan, and Britain’s Interior Minister, Theresa May, who is in charge of immigration and security.

Some trafficking victims and nuns who are assisting them are also attending the conference.

As part of its efforts to combat human trafficking, the Vatican recently launched a new ecumenical and interdenominational network called The Global Freedom Network.

Cardinal Nichols told Vatican Radio that these initiatives enhance the real focus of this conference, which is to make a practical difference, on the ground, in a number of countries, with the help of the Church’s resources.

In his own opening speech, the Nigerian cardinal, John Onaiyekan, remarked: “The Gospel of God’s mercy, freedom and love, preached by the Church, is rejected in practice, with human beings  being treated as slaves,” he said.

“The Church has a responsibility on all levels,” he added. “When we see young boys and girls being sold for money, believing that money will lead to a good life, we need to start teaching them about what real freedom is about, what true happiness is about and what the true meaning of life is.”

As far as the  “traffickers, the real criminals” are concerned, Cardinal Onaiyekan said that when there is an opportunity to speak to them, efforts are made to explain to them that this is not the way to treat human beings.

But despite all that we are able to do, our work has its limits: this is where the civil authorities and police forces come in,” he said.