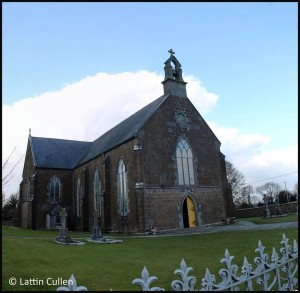 A small community in Co Tipperary is this week celebrating the 150th anniversary of its local Church and the huge community sacrifices which were made to build it.

A number of events are taking place this weekend to mark the sesquicentenary of the Church of the Assumption in Lattin.

These include a concert in the Church by renowned performer Fr Liam Lawton, a special commemorative booklet on the church’s history as well as a performance by the Tipperary Gospel Choir.

Speaking about the weekend’s events, Lattin Parish Priest Fr Tom Egan told CatholicIreland.net, “We owe it to those people who have gone before us. It is only right and fitting that we should celebrate their great endeavours, their great accomplishments. Let us never forget the quarry we are hewn from, as we recall the sacrifices they made.”

Indeed such sacrifices were huge at the time of much land agitation in Ireland with many evictions taking place in the parish.

All of these are documented in a souvenir booklet produced by the committee which gives a fascinating insight into what life was like in the 1860s when the building of the church commenced. 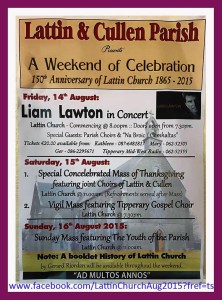 According to the book’s author, Gerard Riordan, “During this period of great turmoil and uncertainty the parish priest and main driving force behind the project, Fr John McGrath continued to push ahead with the building.”

“For several weeks in August and September 1861, weekly notices appeared in various newspapers inviting builders to tender for the new church until they eventually succeeded in getting somebody at the right price.”

Indeed the contract to build the new church for the sum of £2,493 was awarded to the Kilrush-based building firm of Edmond Walsh and brothers. They had also been employed on the construction of churches in nearby Ballysteen and Killmallock.

The church which was built just as the area was recovering from the Great Famine is built entirely of stone from a local quarry.

And the parish, which is the birth place of former Tipperary hurling manager and player Nicky English, has moved the time of its Sunday morning Mass from 11am to 8am to facilitate those travelling to the All-Ireland hurling semi-final between Tipperary and Galway.