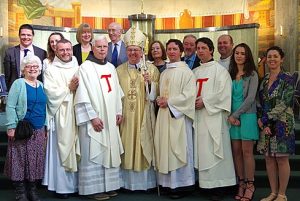 The ordination of Fr Rory Doyle from Wexford on the Feast of the Annunciation was grounds for celebration, not just because his is a much needed new vocation to the priesthood, but also because he is the third member of his family to be ordained.

A member of the Franciscan Greyfriars, who have care of St Anthony’s shrine in Padua, Fr Rory was ordained in Liverpool by Archbishop Kevin McDonald, Archbishop Emeritus of Southwark, on 25 March alongside Fr Maximilian Martin at the Greyfriars Church of St Anthony of Padua in Mossley Hill.

Fr Doyle celebrated his first Mass at the Church of the Visitation of the Blessed Virgin Mary in Fairview, Dublin on Saturday evening last (1 April).

The story of the Doyle family is unique in 21st century Ireland.

A family photo taken at Fr Rory’s brother’s ordination as a Dominican in 2011 shows Fr Brian, flanked on one side by his older brother Fr Jim, who is a diocesan priest in Ferns, and on the other side by Fr Rory, his identical twin, who at the time had just been professed as a Greyfriar.

All three brothers opted to leave their established careers behind to serve God.

Both Fr Brian and Fr Rory have PhDs in engineering, while Fr Jim worked as a civil engineer both in Ireland and as a volunteer with the aid agency Concern in Cambodia and Burundi. In fact, that is where three vocations stories began.

Fr Jim Doyle was ordained eleven years ago. He joined the seminary when he was 27. “In some ways I’m an unlikely priest but my brothers are a lot more unlikely! The reaction when some people heard they were going to be priests was ‘what?!’” 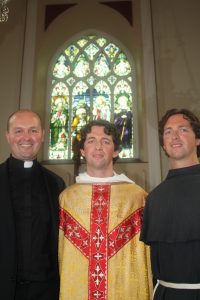 Recalling his life-changing experience in Cambodia he explains, “In a country like that you are surrounded by poverty and you really start to feel grateful for all the things you’ve got.”

He was based in a remote village along with two other Irish guys and an English girl. “We were all around the same age and had a great time, but the days seemed to last forever.”

With time on his hands, he started reading more. “One of the guys was from Northern Ireland and his father was a strong Catholic and he used to send him out books. I think I was really searching.”

Towards the end of his stay in Cambodia, he began praying the rosary for his twin brothers. Though he had remained a practising Catholic even during the heady days of university in Galway, he describes his experience in Cambodia as the start of his conversion.

Back in Ireland for Christmas, he told Rory and Brian about what he had been reading. “To my surprise they were enthusiastic and later they joined prayer groups.”

Burundi in central Africa was Jim’s next overseas assignment. The prevalence of Catholicism meant he could attend Mass more often than in Cambodia.

But Burundi in 1998–99 was a country still reeling from the after effects of civil war and the genocide in neighbouring Rwanda. He recalls the bravery of the Xaverian missionaries with whom he worked. “Two of them had been killed just before I’d arrived. So two more just moved into the presbytery the next week and continued their work. That kind of commitment strikes you.”

Returning to Ireland, he contacted the vocations director for the diocese of Ferns and in due course was sent to study at the French seminary in Ars. He pays tribute to his twin brothers’ role in supporting his decision. “I don’t know if I would have got to that stage if the three of us hadn’t been together in our faith. They were a great support to me and they still are a great support to me.”

It was this mutual support which helped Fr Rory Doyle to find his way into the Conventual Franciscans. He studied at the order’s formation house in Canterbury in the UK.

It was Fr Jim who mentioned Fr James McCurry, OFM Conv to Rory, who had tried a number of orders but couldn’t find one that was right for him.

He recalls, “I was enjoying my engineering but on another level it wasn’t really fulfilling. There wasn’t enough contact with people. I asked myself from time to time – is this what you want to do with your life? What I seemed to be interested in more and more was going to prayer groups, adoration and giving talks on faith at the university with the Legion of Mary. I began to appreciate that a priest can do a great amount of good for people and so more and more I felt drawn to that way of life.”

His first inkling that he might have a Franciscan vocation came thanks to St Anthony. “I went into St Mary’s church in Belfast about ten minutes before Mass was due to start. I picked up a booklet to read and the one I chose was on St Anthony. I really didn’t know that much about him. I was just finishing it when the priest came out to start Mass. He announced it was 13 June – St Anthony’s feast day. I felt St Anthony had sort of introduced himself to me. That was one of the signs that a vocation with a Franciscan order was for me.”

While Rory was still searching, Fr Brian had already joined the Dominicans. He studied for a Master’s in theology at the University of Fribourg in Switzerland. 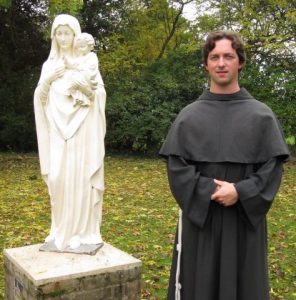 “I grew up in a very happy home and I saw marriage as the ideal state in life. Other people might have seen their parents fight all the time and marriage may have frightened them but it never frightened me; it was always something that I desired.”

But when Fr Jim returned from Cambodia, Brian read one of the books he brought with him. A reflection by the Dutch writer Henri Nouwen on the Emmaus story “spoke” to him and he began to explore his faith more deeply. He was 22.

“At that time the three of us were ready to be converted. I began to realise that I didn’t really pray. I only went to Mass on a Sunday. Even as a student I would have missed a few Sundays. The Catholic religion was in my blood but I wasn’t the most devoted Catholic in the world.”

Though he began to feel called to the priesthood, it took him seven years to discern it. “I resisted for quite some time. I didn’t actually join the Dominicans until I was 29.”

It was Fr James McCurry who spurred Fr Rory to take the plunge into religious life when he was 32.

The OFM Conventual priest impressed him with his vision for the order. “There were a number of challenges for the Conventuals. They were a very small group in England and Ireland of older men.”

The community was in decline and Fr James had been sent over from the US to take charge. Nobody had taken solemn vows for years and so one of Fr Rory’s concerns was that there wasn’t anyone his own age in the community.

“The nearest person was more than 10 years older than me and the person after him was probably another ten years older than that,” he explains. But there were things which impressed him, such as the Conventuals’ loyalty to the Church.

Sr Henrietta, a qualified science teacher by profession, first served as a missionary at St Teresa’s College, Ibadan in Nigeria.

She later moved to St Maria Goretti Secondary School in Benin City, also in Nigeria, where she spent many years as principal of the school. She has now retired to Ardfoyle Convent in Cork City.