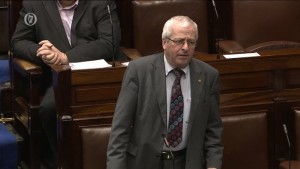 An Independent TD has called on the Government to set up a chapel in Dáil Eireann where TDs can go to pray and reflect.

South Tipperary TD Mattie McGrath made the call as he and fellow Independent TD Noel Grealish organised a special event to distribute blessed ashes to deputies, senators and other Oireachtas staff on Ash Wednesday.

The special Mass which was held in the Members Restaurant at 9.30am was well attended according to Deputy McGrath.

The Independent TD told CatholicIreland.net that he “saw no reason why there could not be a specific space for prayer in the Oireachtas on a full-time basis”.

Deputy McGrath also defended his call for a permanent chapel or prayer room and he referred to the fact that Mass is said in the House of Common in London each day.

“The only way you can guarantee your peace in the House of Commons for the day is to attend a service of worship that morning. It’s a shame with all the hectic and busy activity in Leinster House every day that there is nowhere for someone to go and pray or reflect.”

Furthermore Deputy McGrath said that “in 2009 the Houses of parliament in Westminster appointed their own chaplain – Irish born priest Canon Patrick Browne”.

The Independent also stated that he fully supports the concept of morning prayer in the Dáil.

The Dáil prayer is said at the start of each day’s business in the chamber by the Ceann Comhairle Sean Barrett.

Recently another Independent, Deputy Claire Daly said that she did not believe the prayer had “a place in modern Ireland” and that “we need to go a lot further with the separation of Church and State”.

Citing examples of the US and Australia where morning prayer is used, Mr McGrath said “the idea that prayer has no place in a modern parliamentary system is quite frankly absurd. In 2008, the US Supreme Court gave local government officials across the United States more freedom, not less, to begin meetings with a prayer.”

“I would also make the point that many deputies who talk about how we need to go a lot further with the separation of church and State will meet with huge resistance. These are comments which point to the underlying agenda here.”

“That agenda is a road former Education Minister Quinn tried to go down and he was met with strong resistance; a resistance that I think will also reveal itself if any move is made to eliminate the opening prayer in the Dáil,” said Deputy McGrath.

However some TDs differ with Deputy McGrath.

Speaking this week, Independent Deputy for Kildare North Catherine Murphy said religion should be kept out of Leinster House.

She added, “I am clear in my opinion that there should be a separation of powers between Church and State. There are plenty of churches and other places of worship within easy reach of Leinster House and I think TDs or people working in the Oireachtas could go there if they wish to express their religious beliefs.”