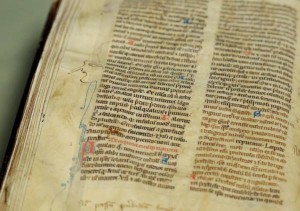 A 14th century manuscript produced by monks belonging to a Cistercian Abbey in Dublin, which was purchased by Trinity College Dublin, was showcased this week.

Trinity College Library is believed to have paid €250,000 at Christie’s auction last November for the document.

An ownership inscription in the manuscript translated from Latin reads, ‘A book of the community of the house of the nourishing Virgin Mary near Dublin’.

It is a reference to the Cistercian St Mary’s Abbey which was the wealthiest monastic house in medieval Ireland.

The manuscript has not been in Ireland since the 16th century.

Produced on sheepskin parchment, and running to more than 200 pages of vellum, its binding dating from the early 1600s.

The manuscript features legal texts such as an early version of the Ordinances that limited the power of King Edward II; Dares Phrygius’ account of the Trojan War; a pseudo-history of Britain’s monarchy by Geoffrey of Monmouth; and writings by Giraldus Cambrensis on the topography and conquest of Ireland.

The manuscript was produced in the wake of a devastating fire at the abbey in 1304, and its pages detail daily life at the abbey.

After the dissolution of the monasteries by Henry VIII, the manuscript fell into private hands and had been lost to the world of scholarship since the 18th century before being eventually purchased by the first Earl Somers.

Trinity College librarian and college archivist Helen Shelton said the manuscript contains a “considerable body of new information which will help to re-evaluate the history and culture of St Mary’s Abbey and the civic life of Dublin in the 14th and 15th centuries”.

“We will be able to digitise it, conduct scientific analysis, textual and codicological [the study of books as physical objects] examination of the manuscript which will promote widespread research, scholarship and popular interest.

“It will also promote scholarship within Trinity across a number of schools, including history, classics, art and architecture, and the medieval studies centre,” she said.

Keeper of Manuscripts and the Head of Research Collections at TCD, Bernard Meehan, explained that, “When Trinity College Library turned to its alumni and friends in the wake of the availability of the St Mary’s Abbey manuscript seeking much needed support for this acquisition, the response was unprecedented in its range of supporters.”

“It included numerous bodies and individuals, as well as scholars, across the university and among the wider historically-minded community in Ireland.”

A small number of other manuscripts from St Mary’s Abbey also survive and are held in the British Library and other major repositories in Oxford and Cambridge universities and Manchester.