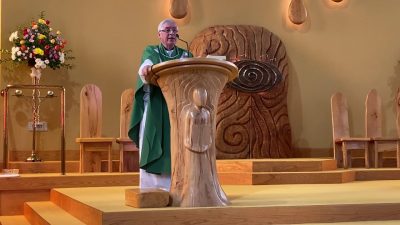 The Taoiseach has praised Fr Oliver O’Reilly’s “considerable courage” in a show of support for the Cavan parish priest who has been undermined by businessman Sean Quinn.

In a statement to RTE News, Leo Varadkar extended his support to Fr O’Reilly for “offering moral leadership in a difficult time” in a homily he gave over 29-30 September following the kidnapping and assault on Kevin Lunney, a director of Quinn Industrial Holdings.

“He offered moral guidance to his community, he condemned the savagery of the kidnapping and the ongoing campaign of intimidation, and called on everyone to cooperate with the authorities. I believe that Fr O’Reilly showed considerable courage in giving this homily and I commend him for doing so,” Mr Varadkar said in his statement.

The Taoiseach’s solidarity follows a statement on Sunday evening in support of the priest from the Association of Catholic Priests.

“The Leadership of the ACP would like to express their support for Oliver O’Reilly PP and the position he has adopted in relation to the recent attack on Mr Kevin Lunney. We admire his courage in speaking the truth in a very difficult situation,” the ACP said.

It followed the Sunday Independent’s revelation that businessman Sean Quinn had written on 21 October to the Papal Nuncio to Ireland, Archbishop Jude Thaddeus Okolo, as well as the Vatican Secretary of State, Cardinal Pietro Parolin, and Cardinal Marc Ouellet, a Canadian prelate, and Cardinal Beniamino Stella, complaining about Fr O’Reilly.

Sean Quinn sent a copy of the letter to Fr O’Reilly and to the Administrator of the Diocese of Kilmore, Monsignor Liam Kelly.

In the letter, Mr Quinn described himself as “a lifelong practicing Catholic and a native of Ballyconnell”, which is Fr O’Reilly’s parish.

The one-time billionaire said he and his family were now victims of “a campaign of public vilification in our own locality on entirely false allegations”.

The letter continued: “Fr O’Reilly has referred to the ‘paymaster or paymasters’ and ‘godfather’, making clear and false references to me. In subsequent media interviews, Fr O’Reilly stated that ‘the dogs in the street’ knows who the paymaster was to whom he referred.”

“I have spoken in person both to Fr O’Reilly and to Monsignor Kelly to ask them to end and correct this campaign of vilification against me from the public and in the media. But a culture of clericalism and clerical unaccountability seems to stand in the way,” Sean Quinn wrote.

In his September homily, Fr O’Reilly strongly condemned the vicious attack by criminals on businessman Kevin Lunney. He told parishioners attending Masses in Ballyconnell and Kildallan, Co Cavan that a “long reign of terror” in the area threatened the lives and livelihoods of everybody living in the Cavan, Fermanagh and Leitrim border region.

The priest, who is in his early 70s, also called out the “Mafia-style group with its own godfather” who he believed was responsible for the attack and the ongoing harassment of Kevin Lunney’s family.

Fr O’Reilly said the “elephant in the room” was the “campaign of intimidation” towards not just Mr Lunney but also to other directors at Quinn Industrial Holdings.

“We have all been a bit reticent about getting involved and speaking up. I hope that more people can now speak out and support them,” he said.

Following his homily, he received an anonymous phonecall warning him to “watch yourself”.

Mr Lunney, a father-of-six, was abducted in broad daylight on 17 September outside his home in Fermanagh and driven in the boot of a car to an animal container in Cavan, where he was tortured and his face was slashed and his leg was also broken in two places.

His attackers dumped him on an isolated rural road.

Fr Roy Donovan of the ACP leadership told the Irish Independent on Sunday that the ACP had issued the statement because, “Priests feel for Oliver; they feel he has been attacked totally unfairly. They feel for somebody like him given his age and that he lives alone – this makes him extra vulnerable.”

“He should at this stage be enjoying the good will of so many parishioners and not drawing all this extra trouble on himself. He works very hard like many priests and lives a full life. He could have kept quiet and said nothing but announcing the Gospel requires prophetic stances – doing the truth as one’s conscience demands.”

The main suspect in the ongoing investigation into the attack on Mr Lunney, Cyril McGuinness, died last week as police in Derbyshire searched his home near Buxton.