Lisa Gurney is a writer in Worcester, Massachusetts, USA.  She wants to share as widely as possible, how Mary helped the lost little girl and the suffering adult.

How Hurricane Katrina affected me

Maeve Mc Mahon OP is an Irish Dominican Sister who set up a school for African American children in New Orleans, but suffered a huge trauma when Hurricane Katrina struck. Here she tells some of her story. The fuller version is in her book recently published. 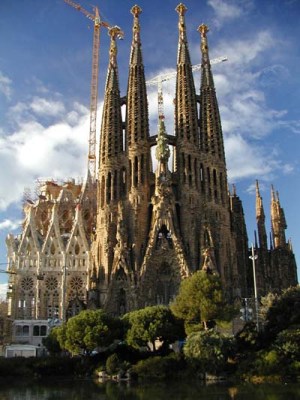 He died a pauper's death but the genius of Gaudi lives on in his wonderfully designed buildings and churches in Spain. No one knows what the final design of the Sagrada Familia was to be.

Angela MacNamara made her name writing as an agony aunt in The Sunday Press during the 1950s and 1960s. She also responded personally to about fifty letters a week as well as those that were published. She was then recruited to talk in schools with teenagers struggling to become adults. [...]

A faith that does justice

Seosamh MacReamon tells of his experience with the Society of St Vincent de Paul as a student in Trinity College and with the organisation “Slí Eile” as team coordinator for the group’s retreat programmes. Through these activities he helped hand on the faith and its values to another generation.

Faith amid destruction in the mountains of heaven

Luigi Di Liegro was a popular and controversial priest who campaigned for social justice especially for immigrants in Italy. Head of Caritas from 1980 till his death in 1997, Pope John Paul II assured him that those who criticised him also criticised the Pope. Desmond O’Grady tells his story.

Mary Aikenhead: in the service of the poor

She reached out to every need, providing health-care, education and social services in a time when these were not provided by the state. Úna O’Neill RSC writes about the work of the founder of her order.

Author Garth Lean’s story of William Wilberforce’s struggle against slavery shows that one person can make a difference, and that it is possible to combine integrity and conscience with a successful political career.

Fr. Richard Sheehy PP explores what it means to ‘pass on the faith’ and how he has worked with this in his Dublin parish.

The murder in 1980 of one of the contemporary Church’s most prophetic and courageous champions of peace, justice and the rights of the poor is recalled by Dermot Keogh.

Cardinal Newman has become a popular source of spirituality since Vatican II and he could soon be beatified. Michael Paul Gallagher SJ gives an account of the man, his struggles and his thinking.

John Murray PP tells the story of the Austrian farmer, Franz Jägerstätter, who rejected arguments of obedience and his own safety and refused to enlist in the Nazi army: he felt in his conscience what they were doing was evil and he would have no part in it.

Preparing for Christmas in the family

Declan and Sarah O’Brien from Prosperous in Co. Kildare share a novel and simple way of preparing for Christmas with their children by building an atmosphere of love in the home.

Brian D’Arcy’s controversial autobiography is his story of struggle between his human nature and his calling. As a Passionist Father he found a way of combining his love for music and sport by becoming chaplain to the entertainment industry (and playing football for charities). He has integrated a career in [...]

Faith languages: thoughts for each day

Using The Catechism of the Catholic Church as his starting point and structure, Patrick M. Devitt provides a range of images, personalities, cameos from everyday life along with a Scripture text to present and illustrate the truths of the Catholic faith. The style is punchy. It is useful not only [...]

Einstein: genius of the 20th century

2005 marks the 50th anniversary of Einstein’s death and the centenary of the theory of relativity. Fritzsch and Helge explain how Einstein revolutionised physics by reinterpreting space and time.

John Sullivan was born into a prosperous Protestant background in Victorian Dublin. Though his mother was a Catholic, it was a surprise to the whole family that he converted to the Catholic faith and entered the Jesuit novitiate at the turn of the century. Conor Harper SJ tells his story.

John Murray PP tells us the story of Eve Lavallière, an accomplished actress and high flyer, who changed her whole way of life when a parish priest invited her to Mass and gave her a book about Mary Magdalen.

Opera singer Michelle Sheridan tells how she keeps her faith alive and nourished and how she manages when her faith is shaken.|

Anthony Krivak’s beautiful memoir of his eight years as a Jesuit becomes a long retreat in its own right as he tests all his desires against the pledge to do all “for the greater glory of God”. It becomes a pattern for our own spiritual search, for our own prayer [...]

What we hand on to our children is not so much doctrines or practices as the capacity to love. Paul Andrews SJ has a sympathetic understanding of how parents hand on their faith to their children and what’s important.

Hans was born into squalid poverty over 200 years ago, his father died insane and his mother ended her days as an alcoholic in a workhouse. Yet his 156 fairy tales probably gave more pleasure, especially to children, than the works of any other writer.

Fra Angelico is well-known as an artist, but he never handled a brush without fervent prayer. He was beatified by Pope John Paul in 1982 and declared patron of Catholic artists in 1984. John Murray tells his story.

Pauline Jaricot founded the Society for the Propagation of the Faith. Through this society lay people can contribute to the organisation of the missions. It was Pauline’s sense of self-sacrifice that was the stimulus to setting it up. John Murray PP tells the story.

Peter Ward C.Ss.R. proposes St Alphonsus Liguori, founder of the Redemptorists, as patron for all those suffering from arthritis, sciatica, muscular pains, and the like.

John Waters is journalist who has become an outspoken campaigner for fathers’ rights in Ireland. He has also written a song to represent Ireland in the Eurovision Song Contest. Here he recalls his journey from belief to unbelief and back again.

Putting hand to the plough: a memoir

Sean O’Rourke tells his experience of sharing prayer with his own young children.