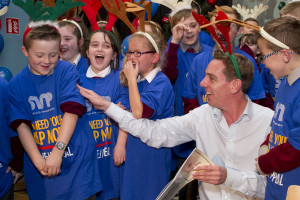 Despite economic indicators pointing to an upturn in the economy there are still many people in Ireland who are cold, hungry and struggling, the Society of St Vincent de Paul (SVP) has warned.

Speaking as the SVP launched its annual appeal titled, ‘We need your help now’, National President Geoff Meagher said, “There is still a spirit of helplessness among many families seen by our volunteers every week.”

The reliance of thousands of Irish families on the Society of St Vincent de Paul (SVP) has remained consistently high over the past five years.

And the numbers show no sign of decreasing in any significant way according to the SVP.

Between now and Christmas in the region of 140,000 people throughout the country will be visited by SVP volunteers.

“Most of those who seek the support of St Vincent de Paul are struggling week in and week out on a basic minimum income, either from state payments or from low-paid employment. It is when they encounter an unexpected cost or a period when additional expenditure occurs, such as Christmas, that is when they critically need support,” Geoff Meagher said.

The SVP has spent almost €200m since 2009 in direct assistance to people in need, an average of €40m per year.

This is an increase of 117% on the years immediately prior to 2009 when the direct assistance was in the region of €23m per year.

SVP members continue to make in the region of 400,000 visits a year to homes throughout the country to provide assistance for a myriad of practical, emotional and psychological problems.

In the past year helping families who have lost, or in danger of losing, their homes has become a major problem.

“The bulk of the direct assistance that we provide goes to helping families with food, energy and education costs. We depend entirely on donations from the public and corporate donors for this work and thankfully the generosity of the Irish people to SVP over the years has been outstanding, We hope that the response to this year’s Annual Appeal is as equally generous,” said Geoff Meagher.

The campaign to bring in the much-needed funds was kicked off by RTE’s Ryan Tubridy.

A whole range of media will be used to get across the message that SVP needs your help now.

“We ask people who want to support our work to please visit, www.svp.ie” said SVP head of fund-raising Nichola Mullen. “

She said that In addition to making donations directly there are an array of options to support the SVP at www.svp.ie/appeal.

These include a virtual gift store www.svp.ie/giftstore. In addition there is a Giving Tree & Food Appeal opportunities. Details at www.svp.ie/givingtree & www.svp.ie/foodappeal respectively.

Companies who wish to order their SVP Christmas cards can find details at www.svp.ie/corporatecards or if they wish to organise their own fund-raising events for SVP can do so at www.svp.ie/runanevent

There will also be a wide range of opportunities for individuals and group to join in and support the appeal.

•   The Aldi ‘Give a gift’ for SVP campaign will be launched on Monday 24th November.  Until 5th December customers are invited to drop off an unwrapped gift with any Aldi staff member at any Aldi store. The campaign will be supported by 2FM.  Those who purchase a virtual gift on the SVP website between 24th of November and the 5th of December are also given the chance to win a year’s free shopping with Aldi valued at €5200 by adding their telephone number. The winner will be announced live on 2FM on 5th December with an all-day radio-thon from 7am to 7pm.
•   Bank of Ireland will be organising a ‘Give Together’ campaign among its staff around the country to volunteer their time to collect food and toys for people in need in their community.  This will culminate in a Christmas market event at its branch in College Green on 13th December
•   The Claddagh Band from Galway, which includes Mary Coughlan and Dolores Keane has recorded a charity single, Part of a Tribe, which will be launched on 5 December.
•   The Irish Examiner will have a selfie competition underway in December.
•   There will be Giving Trees in many retail outlets and offices.