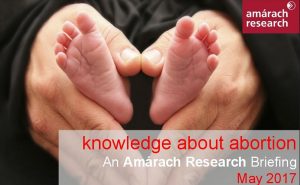 A recent survey on ‘Knowledge about Abortion’ has revealed that there is great ignorance as to the effects of abortion in England and Wales.

The Amárach Research Briefing, released on Wednesday, asked 998 adults to estimate what proportion of pregnancies in England and Wales end in abortion. Respondents had to pick between 1 in 50, 1 in 35, 1 in 25, 1 in 10, 1 in 5 and ‘Do not know’.

The largest number (24 per cent) responded ‘Do not know’. Amongst the others, 21 per cent said 1 in 25 and 20 per cent said 1 in 50. The lowest percentage, 6 per cent, answered 1 in 5, which is the correct answer. “Only 1 in 20 Irish people know the actual incidence of abortion in England & Wales,” noted the briefing.

Again, the largest number of respondents, 31 per cent, answered ‘Don’t know’ to the question. “Only 1 in 10 Irish people know the actual incidence of abortion in England & Wales in cases involving Down Syndrome,” said the Amárach briefing.

The Amárach survey was part of a monthly online omnibus poll of 1,000 adults aged 16 and over conducted in May 2017. Only the responses of those aged over 18 were considered for the ‘Knowledge about Abortion’ briefing which showed that Irish women and young people are more likely to underestimate the incidence of abortion in England and Wales than older people, though the latter significantly underestimate it as well.

Commenting on the research findings, Dr Ruth Cullen of the Pro Life Campaign (PLC) said it was extraordinary how “little time is devoted in the debate to what legalised abortion has led to in other countries”.

She continued: “When proposing changes to the law, particularly changes as radical as those being proposed on abortion, the first thing you’d expect any Oireachtas Committee to do is look at what similar changes have brought about in other countries. But the Oireachtas Committee currently recommending changes to Ireland’s abortion law has scrupulously avoided talking about abortion itself and the changes that inevitably occur when it is legalised.”

The briefing came as the Joint Oireachtas Committee on Abortion continued its hearings. On Wednesday, two pro life expert witnesses decided not to testify at the hearing because they believed any discussion would turn into a “kangaroo court”. 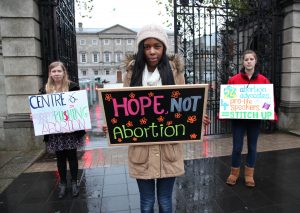 Dr Marty McCaffrey, Professor of Paediatrics at the University of North Carolina, Chapel Hill, and Dawn McAvoy from Both Lives Matter sent two lengthy letters to the chair of the Committee Senator Catherine Noone, declining the invitation for them to give evidence and outlining their positions on abortion.

Deputy Mattie McGrath TD asked for their letters to be read into the record.

He compared the earlier ruling by the Committee that the Eighth Amendment would not be retained in its entirety to a jury bringing in a guilty or innocent ruling halfway through the evidence.

Dr Ruth Cullen from PLC noted that almost the entire focus of the Committee was on repeal of the Eighth Amendment and said that this was depriving the public of “the opportunity to consider what precisely legalised abortion would involve”. She pointed out that 27 groups and individuals advocating abortion had been invited as witnesses before the Oireachtas Committee, while only three “pro-life individuals” had been invited.

“The fact that leading US pro-abortion group Center for Reproductive Rights (CRR) is attending the Committee as ‘expert’ witnesses this week is ludicrous. CRR is actively fundraising at present in the US to change Ireland’s abortion laws and yet they qualify as impartial experts while families of children saved by the Eighth Amendment are turned away.” The credibility of this Committee cannot be restored, she added.