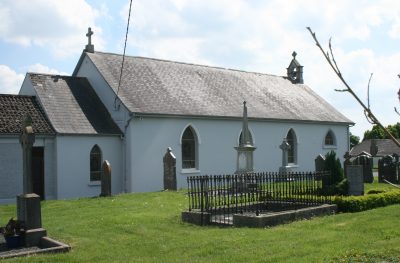 A tabernacle containing Communion hosts which was stolen from St Brigid’s Church in Milltown in Co Kildare was recovered by Gardaí on Sunday.

The sacred vessel containing the ciborium for the Eucharist was located dumped in a field in the vicinity of the rural church.

It was one of a number of objects taken by thieves who ransacked the small church.

St Brigid’s was one of two churches in the Diocese of Kildare & Leighlin vandalised over the weekend.

On Saturday, parish priest Fr Willie Byrne and parishioners of St Brigid’s were shocked to discover that thieves had also made off with the safe from the sacristy, and the candle shrine from the back of the Church.

Priests’ vestments were strewn on the floor.

The alarm was originally raised on Saturday morning by a parishioner who was visiting his mother’s grave at 8am and saw the side door of the church had been smashed.

Speaking to the Irish Independent, Fr Byrne said the thieves smashed a stained-glass window to gain entry to the church and had also broken down the side door in order to remove the sacred objects.

“There was absolute devastation in the parish when we discovered what had happened,” he said.

It is the second time the parish church, which can hold just over 150 people, has been targeted. In September 2018 it was also broken into, though nothing was taken on that occasion.

Fr Byrne paid tribute to his parishioners, who rallied around and cleared up the damage enabling Mass to go ahead on Sunday.

On Sunday afternoon, Gardaí discovered the sacred vessels stolen from St Brigid’s abandoned in a field near Newbridge.

Fr Byrne believes the thieves dumped them there when they discovered that there was no money in any of the objects. “There is a misconception that there is money in parish churches. Any money collected tends to be very small and the candle shrine had recently been emptied.”

Separately, the Church of the Most Holy Rosary in Abbeyleix, Co Laois was also targeted over the weekend.

Parish priest, Fr Paddy Byrne, thanked Gardaí for apprehending the culprit behind “a mindless act of vandalism” in his church which saw a new candelabra, which had been placed over a space where many parishioners like to light a candle, “totally destroyed”.

He suggested that churches need to review their security and consider installing CCTV in order to protect themselves.

“I don’t believe there was any big motivation against the church, I think it was mindless vandalism, which churches are particularly vulnerable to because we choose to keep our doors open,” Fr Byrne said.

He highlighted that the attack on the church was an attack on “a sacred building”.

“People come in here at different times of the day to find a quiet space from the busy and noisy world and to find solace in prayer.” He added that religious buildings like churches and mosques “shouldn’t have to shut up shop over fear of vandalism”.

But he said the two incidents of vandalism in his diocese were a wake-up call to churches to be “on top of their game” in relation to “safeguarding their sacred spaces and vessels”.

“I’m not for closing up the church. In the context of the very stressful pace of life, we want people to be able to come here at any time and be able to light a candle and retreat to a sacred space,” Fr Paddy Byrne said and added, “These are sacrosanct spaces that must be respected.”