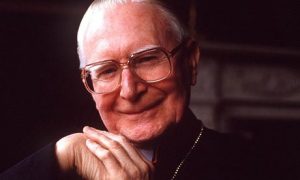 The late former Primate of All Ireland Cardinal Cahal Daly had expressed huge concerns about the class divide among Catholics in Northern Ireland. The revelations were made this week in Irish State papers which were revealed under the 30 year rule.

Cardinal Daly, who at the time was Bishop of Down and Connor (which includes Belfast), said that working class Catholics in Northern Ireland were “anti-authority and anti-everything”. He made the remarks to a senior Irish government official in 1986, saying that the nationalist SDLP party, then under Foyle MP John Hume, had made no serious effort to challenge Sinn Féin in Catholic ghettos.

Bishop Daly said that Sinn Féin leader Gerry Adams was “the working class hero” and that the SDLP “count for nothing”.

According to the archives, the remarks were made during a private and previously undisclosed meeting with David Donoghue, an Irish Government negotiator in Anglo-Irish talks. Memorandums of the meeting show that Bishop Daly believed middle-class Catholics strongly supported the new agreement. He said “in working-class Catholic ghettos of West Belfast, however, where people are anti-establishment, anti-authority and anti-everything, the mood is one of deep scepticism.”

Bishop Daly was also strongly critical of Unionist leaders. He said “There are moderate voices in the unionist camp but they ‘cannot be heard about the din’.” This resulted in Catholics “in the ghettos” turning “all too easy to the Provos for their protection”. He also claimed that the Northern Ireland Secretary of State Tom King MP was a “totally unimpressive politician”.

Cardinal Cahal Daly was later to serve as the Roman Catholic Archbishop of Armagh and Primate of All Ireland from late 1990 to 1996 following the death of Cardinal Tomás Ó Fiaich. In so doing he became the oldest man to take up this role for nearly 200 years. He was later created a Cardinal-Priest of S. Patrizio by Pope John Paul II in the consistory of 28 June 1991. His death on New Year’s Eve in 2009 at the age of 92  brought to an end a two-year period during which Ireland had, for the first time in its history, three living cardinals – Cardinal Cahal Daly, Cardinal Seán Brady and Cardinal Desmond Connell.