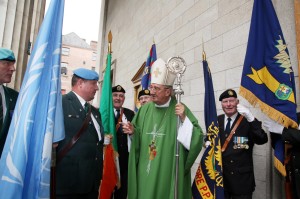 War is a journey down a one-way street and “once you start the journey you almost inevitably establish a further momentum which is self-perpetuating” Archbishop Diarmuid Martin of Dublin remarked on Sunday at a Mass to mark the 100th anniversary of the opening of World War I.

At the official state centenary commemoration, the Archbishop said during the memorial Mass at St Mary’s Pro-Cathedral that the opening of the First World War led to a new industrialisation of weaponry in constant need of replenishment.

He noted that the First World War “even generated a sort of fascination and glorification of war, with underage young men coming forward to something which seemed challenging, but which turned out to be horrendous trauma and carnage.”

The Archbishop told the congregation, which included the Minister for Foreign Affairs and Trade, Charles Flanagan, representing the government, as well as representatives of the Organisation of National Ex-Servicemen and the Royal British Legion Ireland, that they were gathered to remember the millions of young lives lost over those four long years of conflict across Europe.

“We remember the idealism and the valour and the courage of those who served in that war.  We remember in a particular way the thousands of young Irish men who fought and we remember especially those who fell in the pursuit of an ideal,” he said.

In his homily, the Archbishop described the young soldiers caught up in the war, including an uncle of his own, as men and women of courage and valour and idealism.

“The ideals they defended were noble ideas, but war itself is always horrible and leaves all those who become caught up in war marked for life by the inhuman experiences they endured,” he said.

Dr Martin said our remembering the First World War and those who gave their lives in it, must challenge all of us to do all in our power to work for peace. 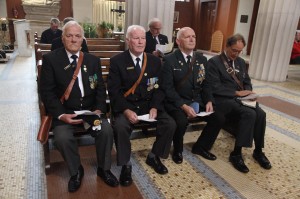 “The horror of war, gave rise to momentary idealism at the end of World War One with the idea of a League of Nations which would reduce the possibility of recourse to war.”

“Such a hope was revived at the end of the Second World War with the establishment of the United Nations and the publication of the Universal Declaration of Human Rights.”

He added, “The horror of prolonged war recalls human hearts to the need to prevent war and eliminate its causes.”

The senior churchman said every Christian is called to bring peace, to build lasting peace and to restore peace in a wounded world.

“War damages the harmony among people and with nature which God originally designed.”

The Archbishop asked if the First World War was necessary and whether it was preventable.

“Did such a conflict have to happen which would last for so many years and cover practically every corner of a Europe which had been showing signs of economic progress and a degree of closeness and friendship about peoples? What went wrong?”

He recalled that Pope Benedict XV in 1917 made a dramatic appeal to end the war which he described as “un inutile strage”, “a useless carnage”.

However, many Catholics on all sides were scandalised. “Senior Catholic intellectuals responded to the Pope saying: ‘we do not want your peace’.”

The Primate of Ireland warned that war does not end with a ceasefire. “After a war, wounds remain in the bodies and in the hearts of soldiers and in the relations between peoples and States.”

“War among States renders the hope of reconciliation among peoples always more remote.” 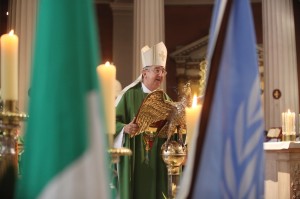 He also reminded the congregation that war has not gone away and that military intervention does not inevitably lead to peace. “Today we are witnessing a spiral of violence all over the Middle East and further afield,” he said.

“The past month of July will be remembered as one of the most striking months of blood in recent years. We see the carnage caused by rockets especially among civilians.”

Archbishop Martin hit out at the industrialisation and commercialisation of war, saying each of these rockets, on whatever side and in whichever conflict, was designed and built, was sold for a profit and bought, was supplied to respond often to interests of people far away from where the carnage occurs.

He referred to the diary of Fr Francis Gleeson, a priest of the Archdiocese of Dublin, who was born in Templemore in County Tipperary in 1884 and ordained in the Pro-Cathedral in 1910, which is conserved in the Dublin Diocesan Archives which chronicles World War One.

After ministering in Dublin for a number of years, in November 1914 at the age of 30, Fr Gleeson became Chaplain to the Second Royal Munster Fusiliers as they set out to take part in the War. 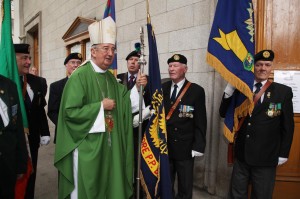 Writing from the front line, it is the diary of “someone who was with and was respected by the troops of every religious denomination.”

According to Archbishop Martin, Fr Gleeson’s diaries show how the faith of his soldiers not just kept them going in the face of the horrors of war, but gave them the hope that they would contribute to the building of a different society where nations and peoples would learn to speak the language of peace and of hope.

“We owe it to their memory to keep that ideal of peace alive in a troubled world,” he said.