Home > News > Increase in number of children crossing into US

Increase in number of children crossing into US 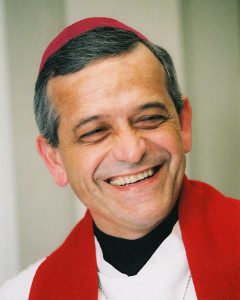 Catholic bishops, Mercy Sisters and other charities have called for a more humane response to the ever increasing numbers of children crossing the Mexican border into the US.

The Mercy Sisters warned that there has been “an ongoing humanitarian crisis” visible daily at the border between the US and Mexico where a “startling increase” is evident of children or unaccompanied minors (persons under 21 years of age) crossing to escape street violence at home.

Once in the US, many face hostility and some have been kept in secure facilities and face deportation.

The US Conference of Catholic Bishops (USCCB) has called for a compassionate and humane response.

The Mercy community has been helping on a practical level and Sr Anne Murphy rsm and Sr Suzanne Soppe have focused on the more than 600 children who are being housed at a military base in Ventura County, California, less than 3 miles from where the Sisters of Mercy co-sponsor a hospital.

“When I think of what these kids have gone through, I cry. I can’t imagine what it is for a parent to send kids away from home for their safety. When I pray I think about them,” said Sr Anne.

She and Sr Susan got involved with others seeking items especially for 13 year-old teenagers.

Sr Anne, as a former school principal and junior high school teacher, felt for this age group because she says they easily get lost as persons but are very generous towards smaller and younger children.

She highlighted the plight of these teenagers among sisters and staff on the Burlingame campus where she works. 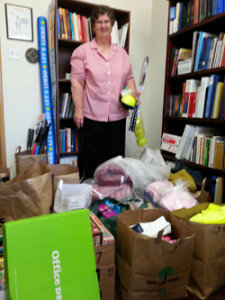 Soon she had received over $1,000 in cash and the promise of further collections and funds.

Her office filled with donated clothes, games, sports equipment, and toiletries. Many of the donors also included special notes for the children and teenagers.

The number of unaccompanied child migrants to the US has hugely increased in the past year, many from El Salvador, Guatemala and Honduras.

Combined with adult migrants, their numbers have overwhelmed housing facilities on the USA-Mexico border.

The situation has been described is a refugee crisis, and attributed to violence, insecurity and displacement in Central America and Mexico.

Many young people are terrorised by gangs, for example in places like Honduras and El Salvador, which are among the most violent, parents are willing to send their children and teenagers on their own over the border to the USA in an attempt to keep them safe.

The US bishops’ conference has supported a Senate bill which would  include $300 million to address factors that encourage migration from Central America, including violence, economic deprivation and family disintegration.

Bishop Eusebio Elizondo, auxiliary bishop of Seattle and chairman of the US Conference of Catholic Bishops’ Committee on Migration, called upon President Obama, and the presidents of the Central American countries involved, to protect and care for children and families fleeing violence in the region.

“The leaders should focus upon the protection of these children and families, as they are charged with as the heads of their nations,” said Bishop Elizondo.

“Instead of cooperating on intercepting them and sending them back to dangerous situations, they should work together to protect them from those dangers, including providing them asylum in neighboring countries and in the United States.”

Bishop Elizondo said that a long-term strategy is required to address the violence and lack of opportunity in the countries of Central America with special attention on helping at-risk youth remain safe and access opportunity at home.

The Bishop also reaffirmed USCCB opposition to proposals to amend the current law to speed the deportations of the children without giving them the benefit of an immigration hearing.

“Families should receive a fair hearing of their asylum claims,” he said.