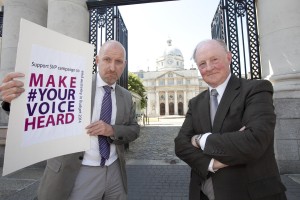 “I am in a living hell, austerity has led me to complete isolation, financially, emotionally and psychologically.”

That is one of the comments made by a member of the public about the impact and reality of austerity on their life.

On Thursday, the Society of St Vincent de Paul (SVP) presented the Minister for Social Protection, Joan Burton, with a book of comments collated from responses made by the Irish public.

It is part of their campaign to end austerity budgets.

The online campaign asked for comments and stories about the impact that the cuts have had.

Many took up the call and told about reality and impact of their struggles. Many others expressed their despair and fears about what further cuts would mean for their families while calls for fairness and the need for hope were other strong topics.

The book which was presented to Minister Burton contained about 300 comments which were representative of the public views expressed in the SVP campaign.

“We struggle on, each day, avoiding the phone calls, and hoping for a miracle. This is not how my life was to turn out,” said one.

Another wrote, “I am in a living hell; austerity has led me to complete isolation, financially, emotionally and psychologically. I have no desire to live other than to find some sense of security for my 15 year old daughter.”

Tom MacSweeney, SVP National Vice-President, said, “The SVP is challenging the unfair burden which has been placed upon those least able to afford it.”

“We are asking Government to lead and make choices which will tackle Ireland’s budget deficit in a fair and equitable way in Budget 2014 and beyond,” he added.

“The messages we are sharing say more than any policy paper could, they compel our Government to listen and take heed. We need the Government to respond and announce a budget for 2014 which does not cause further damage to our communities and citizens, but instead provides us all with hope and a future to look forward to,” he said.

For the last three months the SVP has been asking the Irish people to support its ‘Your Voice’ campaign to end austerity measures in the coming budget.

“Today we continued our pledge to make the voices heard. We requested the Minister to bring this book of people’s comments to the attention of the Government” John-Mark McCafferty, SVP Head of Social Justice, said.

“We thank the Minister for agreeing to accept these samples of the voices we heard.” he added.

The SVP is also preparing a booklet with these comments for distribution to all members of the Dáil and Seanad to make them aware of the impact of austerity on individuals and families who are struggling and to highlight the need for fairness in Budget 2014.

All of comments being circulated by SVP can be viewed on www.svp.ie/yourvoiceheard

The following is a small sample of the comments from the public contained in the book presented to Minister Burton.

“After living abroad for many years, I feel huge guilt for bringing my family back home in 2007, no jobs, no prospects, no future for my children”

“I can’t sleep at night worrying about paying bills and trying to keep my children fed, warm and clothed. I struggle every day”

“We live from day to day, juggle the bills, count every cent twice and just about fall apart when something unexpected crops up, like vets bills or new car tyres”

“It has to stop. I am unable to purchase food every week in order to pay the mortgage”

“I am in a living hell, austerity has led me to complete isolation, financially, emotionally and psychologically. I have no desire to live other than to find some sense of security for my 15 year old daughter”

“It is the future I am concerned about. Without support and work for our young people what does the future really look like for this country? It is bleak”

“School costs are too high.  Free education? Yeah right. We have a 1 year old. What does the future hold for her?”

“The future my children have to look forward to terrifies me”

“Although I put myself through college and managed to get a first class honours degree I can’t get a job. If I was young I would emigrate but I am a single mum and I want to make sure my son is not uprooted”

“We struggle on, each day, avoiding the phone calls, and hoping for a miracle. This is not how my life was to turn out”

The SVP’s expenditure on direct assistance to households has increased by 56% since 2008.

In 2011, the SVP spent over €22 million on food and cash assistance, and over €10 million was spent on helping households with their energy costs.

SVP members see at first hand the devastation which a bill too many or a cut too far can bring about for vulnerable people, wreaking havoc on their lives, their children’s lives and the whole community.

This experience led SVP to launch a campaign for fairness and an end to austerity in Budget 2014.