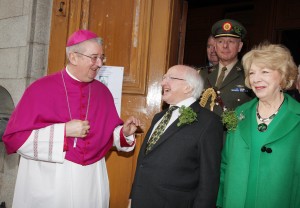 President Michael D Higgins has greeted all who celebrate Ireland’s national day at home and abroad, where Irish people have migrated.

In his St Patrick’s Day message he added that Ireland’s patron saint had a life of hardship and migration.

“St Patrick, we are told, was trafficked into Ireland as a slave, managed to escape, but chose to leave his native land again and return to Ireland. In the centuries that followed, migration has remained a constant feature of the Irish experience, defining us as a people, and shaping our outlook on the world,” he said.

Among the many Irish who met the President abroad, and more than 80,000 who have visited Áras an Uachtaráin, are those active in community groups and civil society who are building an inclusive, sustainable and fair society.

“Their passion, energy and commitment are building blocks of our nation, and their practical actions of solidarity provide the threads that make up the multi-coloured tapestry that is our Irish nation today,” the President stated. 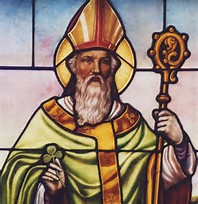 Archbishop Eamon Martin sent greetings from the Cathedral City of Saint Patrick in Armagh to Irish people everywhere. He also remembered in a special way the bravery, commitment and dedication of the women and men of Ireland’s search and rescue services.

“Our prayers are with the families of the crew of Coast Guard Helicopter Rescue 116: Captain Dara Fitzpatrick, Mark Duffy, Ciaran Smith and Paul Ormsby,” he said.

He also spoke of how St Patrick first encountered Ireland as a migrant. He welcomed the many ‘new Irish’ who have made their home in Ireland.

“This Saint Patrick’s Day, prompted by the situation of thousands of displaced people around the world, let us think about Patrick the ‘unlearned refugee’ (as he once described himself), the slave in exile, Patrick the undocumented migrant. Many of our compatriots remain undocumented in various countries around the world and in some cases feel vulnerable and treated with suspicion,” he said.

He spoke of the enormous humanitarian and pastoral challenges facing growing numbers of people who find themselves displaced and without status in the world. Referring to the refugee crisis in Europe, he invited prayers for refugees and for all displaced families. He saluted the Irish Navy, which has helped rescue thousands of migrants from the Mediterranean.

Archbishop Martin said the patron saint was able to feel great empathy with the struggles of his people.

“Centuries later Saint Patrick continues to inspire Irish people everywhere to speak and work for an end to similar exploitation where it is happening today,” he said.

On the eve of St Patrick’s Day, Armagh city’s cathedrals, both named after the national saint, were illuminated in green. There was also a Vigil walk between the two illuminated cathedrals, beginning at the Church of Ireland Cathedral and moving to the Roman Catholic Cathedral.

Archbishop Richard Clarke led the prayers at St Patrick’s Church of Ireland Cathedral and then guided the group via torchlight to St Patrick’s Roman Catholic Cathedral, where they were welcomed by Archbishop Eamon Martin. They wanted this to be a symbolic expression of the unity of the churches and a reflection of Patrick’s own journey of uniting the Irish people with Christianity. 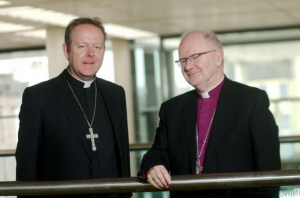 Solidarity is the theme of another special St Patrick’s event. Bell ringing by Christians has long been associated with coming together for prayer. On Sunday 19 March, churches and cathedrals of all denominations across Ireland and beyond will ring their bells so, as organisers put it, the bells will “drown out anti-immigrant views, replacing the sounds of hate with the call for justice”.

This initiative by the Church of Ireland Dean of Waterford Maria Jansson, it will be launched by the former President of Ireland Mary McAleese at 11 am (Irish time) on Sunday 19 March in Christ Church Cathedral, Waterford.

The Mercy Sisters at Baggot Street will ring their founder Catherine’s bell and have invited all their associates and friends to do so also.