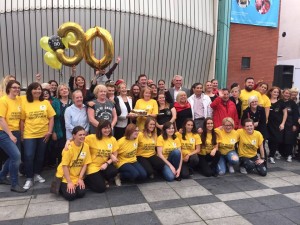 It was in September 1985 that Focus Ireland first opened its coffee shop, advice and information centre in Temple Bar as a direct response to the lack of services for people who were homeless in Dublin at that time.

Speaking at the event in Meeting House Square – just across the road from the Focus Ireland Coffee Shop – Sr Stan, who is a member of the congregation of Religious Sisters of Charity, highlighted the importance of the charity’s work over the years.

She continued, “While it is a sign that things are getting worse for many, it is important to highlight that organisations like Focus Ireland are there to help support people who need it. However, as recent figures show the homeless crisis is continuing to escalate with more and more families losing their homes. This worrying trend highlights that a lot more needs to be done to tackle this growing issue.”

Sr Stan went on to describe how Focus Ireland’s services are helping people affected by homelessness, “I know from speaking to them every week how important it is for them to have someone there to listen to them, to lend a helping hand when sometimes all other doors have been shut to them.”

“The great support we get means we are able to run 70 vital lifeline services around the country and also provide a permanent place to call home for up to 650 households who were homeless or at risk. This means we are able to run services to support young people when they leave care by providing aftercare outreach services and also accommodation for some of these young people.” 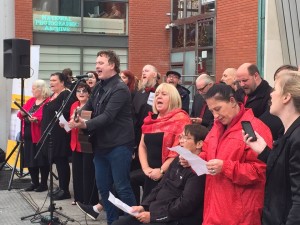 The High Hopes choir also performed. The choir, which is made up of people affected by homelessness, was the subject of a three part documentary called High Hopes which aired on RTE television in 2014.

The choir teamed up with Mundy to perform a special rendition of his hit ‘Mexico’. Sharon Murphy also took to the stage with the High Hopes choir, performing a stunning version of Bob Dylan’s ‘Forever Young’.

Speaking at the concert, choir member Josie Lynch described how proud she was to take part in the event.

“I’m so happy to be here singing with the High Hopes Choir. Fifteen years ago, I was homeless and had nobody to turn to. Focus Ireland housed me and gave me the help and support that I needed to turn my life around. It’s nice to be here today to recognise the work of the charity who have helped so many people over the past 30 years.”

Focus Ireland CEO Ashley Balbirnie paid a special tribute to all the donors, businesses and funders who have made the work of Focus Ireland possible over the years.

“We want to pay a sincere thank you for all the great support we have received since 1985. I know from Sr Stan that this work has touched thousands of lives over 30 years. It’s a fitting time to congratulate all the people who have approached Focus Ireland over the years for achieving what they have in their lives and thanking them for placing their trust in our organisation to support them at their time of need.”