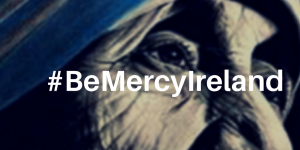 The Primate of All Ireland, Archbishop Eamon Martin, has been overwhelmed by the stories and examples of goodness, kindness and mercy he has heard of individuals who put the corporal and spiritual works of mercy into practice in their daily lives.

The Archbishop invited people to share with him the names and work of individuals putting mercy into practice so that they could be remembered at a special #BeMercy Mass of Thanksgiving on Saturday evening in St Patrick’s Cathedral in Armagh.

During the Mass, Mercy nun, Sr Consilio Fitzgerald and Trócaire director, Éamonn Meehan, received the St Patrick’s medal on behalf of all those who are ‘doing mercy’ in Ireland today.

The Archbishop said Sr Consilio had shown such powerful leadership in the work of mercy through her teams at Cuan Mhuire centres all over the country while Éamonn Meehan and Trócaire had for more than forty years been doing the work of mercy and justice on our behalf all around the world.

In his homily, Archbishop Martin said he had been told about people of all ages who are reaching out in love and charity, for example, to the poor and needy, to the sick and elderly, to the anxious and the troubled.

“At our Mass this evening we give thanks to God that there are hundreds, thousands even, of people living and working among us who are doing something beautiful for God, allowing God to write his mercy into the world through them and in return, seeing the face of God in the people they serve,” he said.

Of Sr Consilio and Cuan Mhuire’s work, the Archbishop said, “They reach out to women and men with addictions, particularly to alcohol and drugs – it is truly a work of God’s mercy. By being merciful and loving to those who have lost control of their lives and their addiction, Cuan Mhuire provides a space where people can humbly admit their need for help and support and for grace outside of themselves to put their lives back together again.”

Noting that ‘Trócaire’ means ‘mercy’, he said the Catholic agency helps to restore dignity to those who have to flee their homes and villages because of war, persecution and violence.

“Trócaire is there in the aftermath of natural disasters like earthquakes, tsunamis or hurricanes to help people pick up the pieces and begin again. This is indeed the work of mercy,” Dr Martin said.

But he stressed that Sr Consilio and Éamonn Meehan were not receiving the medal for themselves, or even for their organisations.

“They are receiving it on behalf of the hundreds, thousands of people who are doing the work of mercy among us every day, often without any recognition or praise – people that you and I know who are angels of mercy, bringing love, joy, compassion and hope into our broken world.”

Archbishop Eamon Martin said that he had heard about groups in the parishes of Armagh and beyond who provide food banks, soup kitchens and other help for the homeless and those who are struggling with financial hardship and worries.

“I learned about those who work with adults and children with intellectual and physical disabilities and special needs; there are so many people in our homes and nursing facilities who give time to the elderly, women and men with alzheimers or other forms of dementia – I’ve heard mention of addiction services to those who struggle with alcohol, drugs, gambling or other addictions; people have shared stories with me about carers, nurses and doctors whose daily work is not just a job or profession, but an act of love and compassion – a work of mercy.”

“Several people spoke about how they and their families have been supported at moments of tragedy or sudden bereavement; others mentioned the counselling and helpline services that are available to those who are struggling mentally, even to the point of considering taking their own lives – and we have individuals and groups who reach out to families and loved ones of those who have died by suicide.”

He said he had also learned that there are many good people who are doing spiritual works of mercy – praying for others in prayer groups and in Eucharistic adoration; teaching their children and grandchildren about the faith – sometimes having to challenge their behaviour, but advising and instructing them in a loving and compassionate manner.

“The work of teachers in our Catholic schools who support parents in handing on the faith was highlighted to me. Some of you wrote about people who are there to comfort and console you at a time of loss or bereavement; others told me about the work of counsellors who have helped them heal the wounds of relationships in their marriage or family. It was reassuring for me that so many priests and religious were mentioned – many people simply wanted to nominate their own parish priest or parish sister as an example of someone they know who is merciful, as our Father is merciful.”

He said it was heartening to notice people mentioning their family members.

“One man simply responded to my request for people who do mercy by writing back just two words: ‘my wife’; a mother told me about her teenage son who helps her monitor her injections and sugar levels every day as she has severe diabetes; two young children told me about their granny who helps them with their homework and teaches them their prayers; I’ve read about people giving up their work to take care of their elderly parents and of a woman who sends a card or letter of encouragement every month from America to her cousin whose husband died three years ago.”

He observed that a “startling feature” of so many of the examples he had been given is that most people do their works of mercy without wanting any recognition or reward – “they care gently behind the scenes, bringing the merciful love of Christ and the joy of the Gospel to those who need it most”.

“In particular I am struck by the generosity of spirit which characterises the voluntarism amongst our young people, our mothers and fathers who every day, within our very own communities, give of their personal time in order to manage schools, sporting clubs, youth associations as well as the Church at parish level,” the Archbishop of Armagh said.