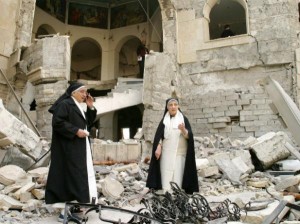 Dominican Sisters of St Catherine of Sienna have warned that with Mosul’s Christians displaced, ISIS is taking over Christian churches in the city.

In a heartfelt letter, the Dominican Sisters of St Catherine of Sienna relate how ISIS has destroyed two mosques and their shrines, one of which was considered a national monument.

The Sisters say that so far, crucifixes have been removed from Christian churches but they are not sure about the extent of the damage done.

The mosque of the Prophet Younis, or Jonah, said to be the burial place of Jonah, has been destroyed as the militants who claim that such mosques have become places for apostasy, not prayer.

“This was really too painful for all people as Jonah’s shrine was considered as a monument. Also, it was a historical place as it was built on an old church. Destroying such places is a destruction of our heritage and legacy,” stated the Sisters.

The Sisters report that so far (the letter is dated 4 August), 510 families have been displaced from Mosul.

There was an ISIS deadline to leave and some managed to take belongings with them. However, 160 families left Mosul with only the clothes they had on, and they lost everything.

These families are in need of help and support, and people in other Christian towns have taken them in. However those who give shelter themselves have not had their salaries for two months (June- July) so they can offer very little to the displaced. The salaries of government employees in areas under ISIS control are being suspended.

Because of the fighting in Mosul and the whole province of Nineveh, the economy is suffering.

99% of people have no jobs to go to so everyone is in need.

Christians from the plain of Nineveh have not received their food supplement, which the government used to provide via the smart ration card. This is causing a crisis not only for the refugees, but also for the residents in the area.

There are some families staying in church halls in Nineveh. In Karakosh the situation is slightly better and residents are welcoming refugees in their homes and churches are providing for them.

There are plans to provide temporary accommodation in some kind of caravans with the help of donations but this is taking longer than expected.

The Sisters said that Mosul is under Islamic rule.

“ISIS is setting some rules that even Mosul residents cannot tolerate. Like forcing young people to join them, preventing women going out, and enforcing the strict interpretation of Islamic law,” wrote the Sisters.

At the time of writing there were Muslim Feast days and once those were over the sisters said that people in towns around Mosul were afraid that ISIS would get even stricter.

“This period of Muslim feast was a kind of intermission, but no one knows what to expect next,” the Sisters said. But there are already signs that ISIS is extending the controlled zone.

Meanwhile, fighting continues between ISIS and other factions and government forces.

Most Christians in the towns of Batnaya and Telkaif have left their homes because they are very close to Mosul.

The Dominican Sisters in these towns also had to leave with the 99% of people who left because of violence outside the town.

The situation in Karkush was calm at the time of writing, but the exodus from other towns caused fear among other Christians and some families from Karkush have left for Kurdistan.

“This in any case weakens Christians’ feeling of belonging to the country,” stated the Sisters.

They also express their surprise that some countries of the world are silent about what is happening.  “We hoped that there would be stronger international approach toward Iraq, and Christians in Iraq in general,” they said.

They thanked those who journeyed with them through prayers and support in the past few months and said that in this time of peril they are hoping for a miracle from God.