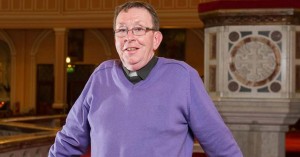 Internet success Father Ray Kelly has revealed that he is committed to his vocation as a priest.

The parish priest of Oldcastle, Co. Meath shot to fame last month when he sang a personalised version of the Leonard Cohen hit “Hallelujah” at a wedding in his parish.  The video went viral on YouTube and received in excess of 34 million views before it was taken down.

“Next month I celebrate 25 years as a priest.  It’s a lifelong commitment and I love the parish,” he told the Sunday Independent.  “First and foremost, I am a priest, but I think my duties in the parish and the singing can work successfully together.”

He has emphasized that he will always remain faithful to his priestly duties, regardless of any commercial music success.

Originally from Tyrellstown, Co. Westmeath, Fr. Kelly joined the priesthood after a working as a civil servant in Dublin for over a decade.  He said that his decision to become a priest was made over a couple of years.

“A few of us went to Rome in 1980 with the Irish Catholic Youth Council, about 50 in my group and three or four of us went on to become priests,” he explained.  He has also said that he believes there is a positive shift in Ireland toward the Catholic Church.

Fr. Kelly worked in Tzaneen in the northern Transvaal area of South Africa, at the time of apartheid.  He worked in a “white church,” as well as in the black townships.  While there, the apartheid system was slowly crumbling.  He said that as a white man it took a while to build up trust with the South Africans, both with the black and white communities.

His abiding memory of his time in South Africa is “the warmth of all South Africans, both black and white,” he told CatholicIreland. He also says that they were very “receptive to him.”

In addition, he undertook Mission Appeal work in the US to promote St. Patrick’s Missionary Society, spending time in parishes telling people about their missionary work in South Africa.  His visits extended to New Jersey, California, Massachusetts, Texas and Illinois.

With regard to his singing, he says that he is “getting closer to a record deal” and that he will be “working on an album over the summer,” which he hopes will be ready for the Autumn/Christmas market.