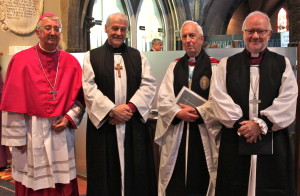 Every battle, whatever the scale, and every war of whatever size, in any age, “brings grief, misery and hopelessness to many”, the Church of Ireland Primate of All Ireland said at a commemoration service to mark the bicentenary of the Battle of Waterloo.

In his sermon at St Patrick’s Cathedral in Dublin on Thursday, Archbishop Richard Clarke said Waterloo was a turning point in the political history of Europe.

The Choral Evensong was sung by the Cathedral Choir of St Patrick’s to commemorate the fallen of all nations at the battle on 18 June 1815.

Addressing members of the diplomatic community and representatives of the Irish Defence Forces, who attended the choral service, as well as the Archbishops of Dublin, Most Revd Dr Michael Jackson and Most Revd Diarmuid Martin, and the Moderator of the Presbyterian Church in Ireland, Right Revd Dr Ian McNie, Archbishop Clarke said the battle which pitted Napoleon against Wellington was “the conclusion of a long and continuing war that had brutalised people and nations”.

It was a battle in which over 30,000 men may have died, literally within a few hours and within a very small area of ground, with many more mutilated and incapacitated.

For some, the commemoration of events in 1815, is far from a pleasant remembrance – the humiliation of their country in another age being re-played, Archbishop Clarke said.

For others it may appear as a vindication for what they hold to have been their culture and tradition.

“For none should it be a day for xenophobia or nationalist chauvinism,” Dr Clarke said.

Referring to one of the memorials for Waterloo being inaugurated which bears the words, ‘Closing the gates on war’, Archbishop Clarke said, “We have much still to learn”.

The Church of Ireland Primate of All Ireland asked if two hundred years later, with two horrific world wars in the intervening period and many other smaller-scale wars fought out on European soil right through to the present day, “can we deny that we have not learnt the lessons nearly quickly enough”, he asked.

“Closing the gates on war” is a fine and noble aspiration as a fitting memorial of the Battle of Waterloo, but it will not be painless if it is being taken seriously, he suggested.

“It will mean closing the gates firmly on all narrow nationalistic pride, on all that makes for the indignity and degradation of others, whether racially, economically or socially,” he told the assembled congregation in St Patrick’s Cathedral, Dublin.

He continued, “It means standing firmly against a pseudo-liberalism that quickly turns into a cruel totalitarianism when dealing with minorities whose understanding of life does not conform to the fashionable consensus. It means closing other gates against an avaricious pillaging of the environment that will ultimately (if not today or tomorrow) drive others into violence as the only means of their survival.”

He underlined that “Closing gates on war” will only ever be a sanctimonious cliché if it is not seen as carrying a real cost and a serious price-tag.

The Archbishop emphasised that closing gates on future war and opening gates on authentic harmony is not the softest option, “but it should surely be the only proper option”.

He recalled that Wellington told his friends not to congratulate him after the victory at Waterloo, because what he felt most acutely was the loss of so many.

“The pity of war should never be far from our prayers and our thoughts at such a time as this,” Archbishop said and added, “For us, in this place and in this context of Christian worship, it is the opportunity to pray for the healing of nations, but also that we may be given the sacrificial and demanding courage to close the gates on war and open the gates to a generosity of living, that the King of Glory may come in.”