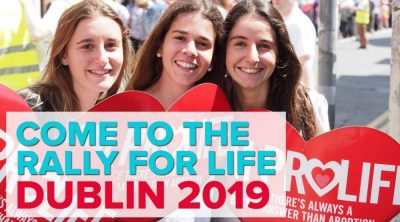 Archbishop Eamon Martin will join thousands of pro-life activists at the Rally for Life in Dublin next Saturday (6th July).

Now in its twelfth year, the rally begins at Parnell Square at 2pm. People will then march through the centre of the city to the Customs House where speeches will take place.

Among those addressing the rally will be Dr Trevor Hayes a consultant in obstetrics & gynaecology, one of the four consultants who wrote to the HSE last week to inform them that Kilkenny Hospital would not be suitable for providing abortions. Carol Nolan TD will also be at the rally, joined by other pro-life female politicians.

Niamh Uí Bhriain of the rally organising committee told CatholicIreland.net that people wanted to continue to stand for life because they felt that no vote, no law and no referendum could ever make it right to kill a child.

“People were sold abortion as something that would be ‘safe and rare’ but that has already been exposed as untrue, with abortion doctors and even the Board of the Rotunda estimating that there will be 10,000 abortions in Ireland every year,” she said.

“Pro-life people were shouted down when we tried to warn that this was inevitable, but sadly, we are now looking at the number of abortions trebling.”

Ms Uí Bhriain said a key role for the pro-life movement now is to ensure that the new abortion regime is subjected to “endless scrutiny”.

“We will do this by insisting that cases like the horrific abortion misdiagnosis case in National Maternity Hospital are subject to investigation, and by keeping the public aware of developments; by examining the outcome of the regime in terms of the numbers and categories of abortions taking place; and by investigating and monitoring the actions of abortion provision,” Ms Uí Bhriain said.

Referring to the abortion misdiagnosis case in the National Maternity Hospital, she said the parents in this case reported that they were pushed towards an abortion and told not to wait for a diagnostic test which would have shown their baby did not, in fact, have an abnormality.

“They are devastated, and this tragic case has highlighted the government’s failure to put safeguards in place because they were in such a rush to legalise the most liberal abortion law possible.”

Most Yes voters did not support an unrestricted abortion regime, and this will be the undoing of the new law, she continued. “The ugly nature of abortion has led to a reverse culture shift in many others countries, where people who were once led to believe abortion was a necessity are now horrified at what changing the law has led to.”

There are no official figures as to the number of abortions which have taken place in Ireland since January, when abortion procedures began. However, the Southern Taskgroup on Abortion and Reproductive Topics, representing around 250 medical professionals involved in abortion provision, told the Irish Examiner that its members estimate they are carrying out around 800–900 terminations a month.